Ocean Heatwaves Dramatically Shift Habitats
August 05, 2020
Marine heat waves across the world’s oceans can displace habitat for sea turtles, whales, and other marine life by 10s to thousands of kilometers. They dramatically shift these animals’ preferred temperatures in a fraction of the time that climate change is expected to do the same, new research shows.

New Research Helps Managers and Ship Crews Predict Locations of Blue Whales so Ships Can Maintain Safe Distances
July 09, 2019
A new model based on daily oceanographic data and the movements of tagged whales has opened the potential for stakeholders to see where in the ocean endangered blue whales are most likely to be so that ships can avoid hitting them.

New Research Reveals Clearer Picture of Upwelling That Feeds West Coast Marine Ecosystem
May 09, 2019
Great volumes of nutrient-rich water welling up from the deep ocean fuel the West Coast’s great diversity of marine life. Now scientists using satellite images, research buoys, ocean models, and other ocean monitoring tools have brought the upwelling into much sharper focus, measuring even the velocity of the water and the amount of nutrients that it delivers. 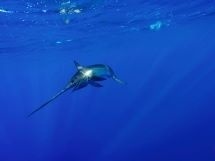 New Tool Helps Fisheries Avoid Protected Species In Near Real Time
May 31, 2018
New computer-generated daily maps will help fishermen locate the most productive fishing spots in near real time while warning them where they face the greatest risk of entangling sea turtles, marine mammals, and other protected species. Scientists developed the maps, the products of a system called EcoCast, to help reduce accidental catches of protected species in fishing nets.

New Tool Helps Fisheries Avoid Protected Species In Near Real Time
May 30, 2018
Scientists developed the maps, the products of a system called EcoCast, to help reduce accidental catches of protected species in fishing nets. Funded primarily by NASA with support from NOAA, California Sea Grant, and Stanford University, Ecocast was developed by NOAA Fisheries scientists and academic partners with input from fishermen and managers.

New Forecast Tool Helps Ships Avoid Blue Whale Hotspots
November 29, 2016
Now researchers from NOAA Fisheries, Oregon State University, and the University of Maryland have combined that trove of tracking data with satellite observations of ocean conditions to develop the first system for predicting locations of blue whales off the West Coast. The system, called WhaleWatch, produces monthly maps of blue whale “hotspots” to alert ships where there may be an increased risk of encountering these endangered whales.

‘The Blob’ Overshadows El Niño
July 18, 2016
El Niño exerted powerful effects around the globe in the last year, eroding California beaches; driving drought in northern South America, Africa and Asia; and bringing record rain to the U.S. Pacific Northwest and southern South America. In the Pacific Ocean off the West Coast, however, the California Current Ecosystem was already unsettled by an unusual pattern of warming popularly known as “The Blob.”

What Was Killing the Young Right Whales? New Research Zeros In On A Suspect
November 02, 2015
The baby whales suddenly began dying in 2005 and continued for several years running. Scientists had never seen anything like it around Peninsula Valdes, an important calving ground for southern right whales on the coast of Argentina, or anywhere else for that matter. The average number of right whale deaths per year at Peninsula Valdes jumped more than 10-fold, from fewer than six per year before 2005 to 65 per year from 2005 to 2014. 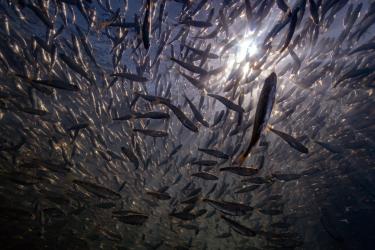 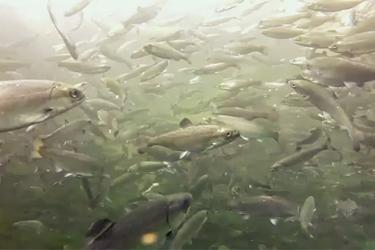 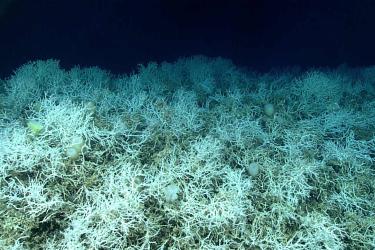 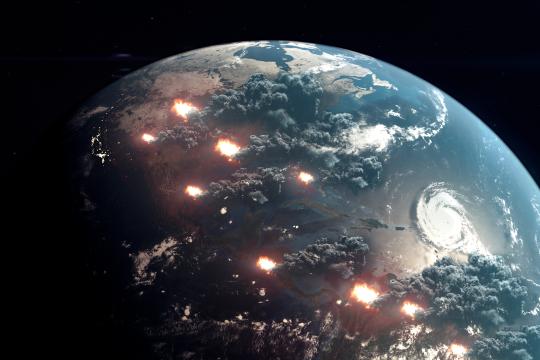 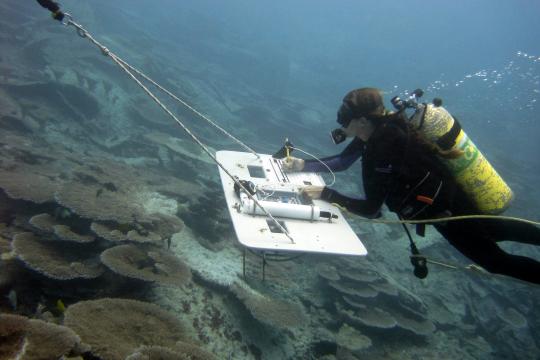