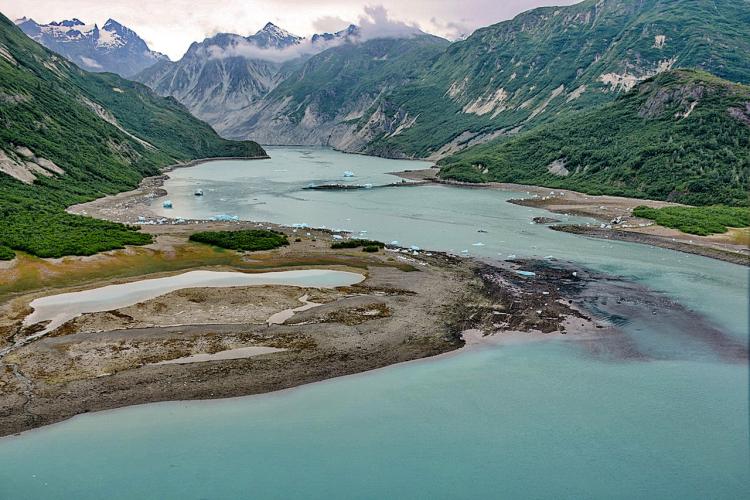 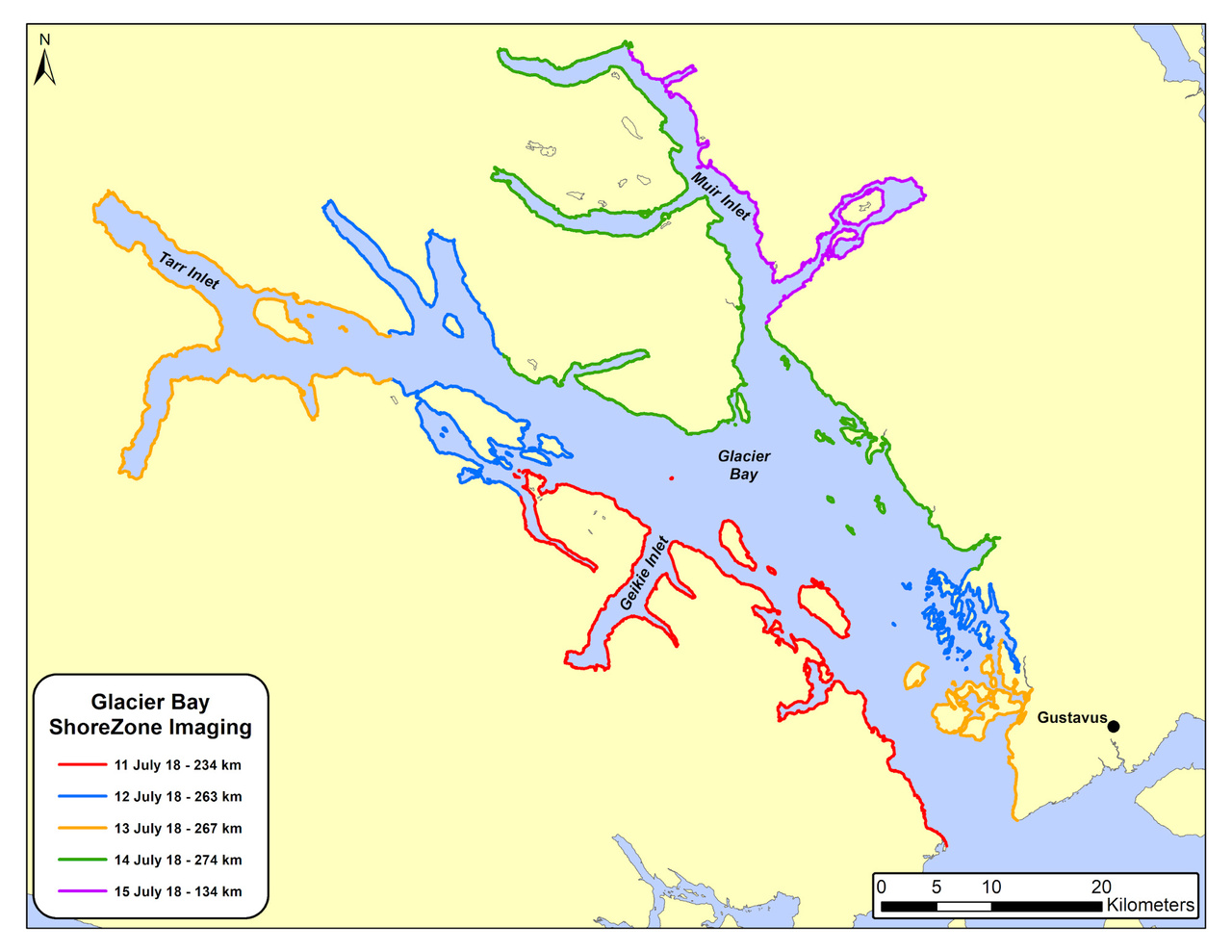 Our work on day four entailed imaging portions of the spectacular Muir Inlet area in the northeastern region of the bay. Ho-hum, more glaciers, icebergs scattered about, humpback whales, sea lions, seals, bald eagles, and bears. Its day four and we are definitely feeling the pangs of the previous 3 days of early morning risings, intense surveys, and post-processing into the wee hours of the night. No restful sleeping until all the imagery is backed up and safe. However, still lots of excitement pushing forward for another day of flying and completing all of Glacier Bay.

Plenty of icebergs but where is the glacier? You can tell the glacier must be back around the corner where it has carved a steep, barren shoreline on the turn. Some of the icebergs have run into a glacial moraine that cross-cuts the inlet halfway back. These moraines intercept the ebbing and flooding tides moving nutrients back and forth through the inlet and they are often black with dense beds of filter-feeding mussels. The glacial fresh water dilutes the salt water which mussels can tolerate but many of their predators such as sea stars cannot tolerate freshening of the water. The mussels are left to filter feed and grow unabated without predation and therefore a very common and often impressive “bioband” in the bay. 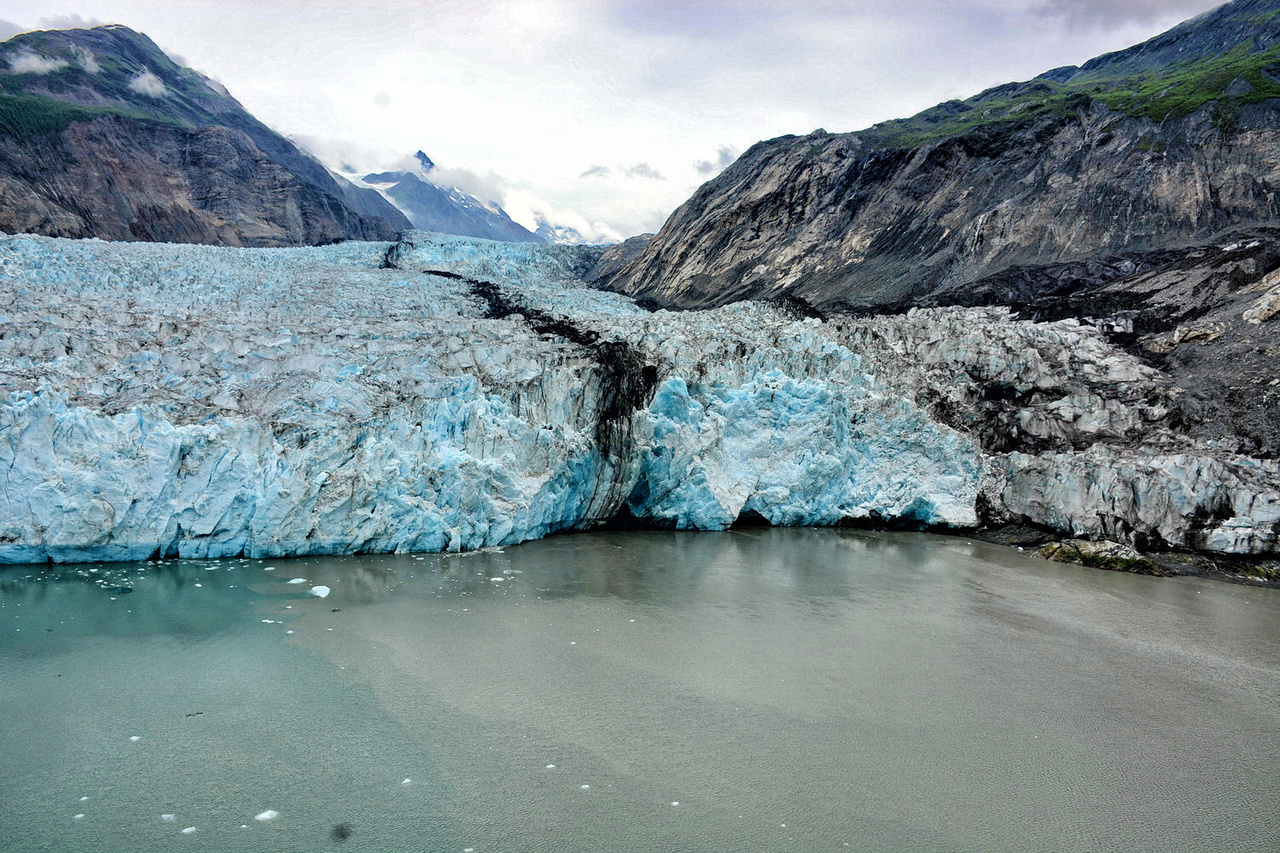 McBride Glacier is about ½ mile wide and 14 miles long. Its ice face is approximately 200 feet high above the waterline and currently extends about 270 feet below it. Ice flow rates have not been measured, but are estimated to be on the order of 3000 feet per year. McBride Glacier has been steadily thinning and retreating by calving since the 1960s after its separation from Muir Glacier. Submarine moraines mark several positions in McBride Inlet where the ice margin was stable in position for several or more years. Over the last 5 years, retreat rates have increased with occasional massive calving events releasing enough large icebergs to fill all of McBride Inlet. The rate of retreat accelerated as the ice margin receded from water with depths of 60 feet at the edge of the ice face and a proglacial basin of around 120 to 140 feet depth in 1999, into a deeper basin where depths were measured to be around 250 feet or deeper. In the summer of 2003, a significant amount of calving had occurred, more so than in the previous two years. A significant portion of the northern half of the ice margin had receded ~ 85 meters in less than an estimated 7 day period. With deep water at its margin, McBride Glacier is expected to continue receding at a fairly rapid pace.