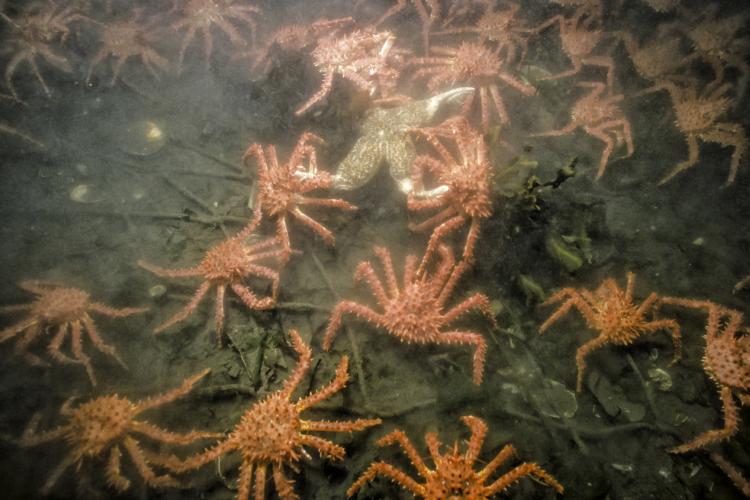 Throughout development, from early larval stages to young juveniles, crabs cultivated by Alaska Fisheries Science Center Shellfish Assessment Program scientists are used in a variety of studies. Such studies include investigations on larval crab settlement behavior, cannibalism/predation, use of critical habitats, as well as comparative growth studies. Experimentation with different culture containers, as well as static and flow-through seawater systems, is also being conducted to ultimately design an optimal culture system that will provide researchers with larvae (at various stages) for the various research projects.

The first step in the crab cultivation process is to collect larvae from individual female crabs that have been isolated from each other. The larvae are then cultivated in 20-liter containers. Adult female crabs release variable numbers of larvae daily over a period of time.

There are several larval or zoea stages, each one an evolution in body morphology until the organism begins to take on the characteristic shape of a young crab. The growth of juvenile and adult crabs is punctuated by a complex and fascinating process called molting. Different species of crab have different numbers of zoeal stages. After hatching out as a planktonic larva, a king crab molts 5 times, at 1-2 week intervals, before becoming a small crab. After a few months, red king crab larvae molt to the megalops or glaucothoe stage and settle in approximately 64 days. No longer larvae, the juvenile crab settle to the bottom and hide. 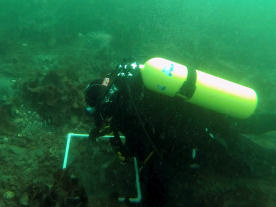 Red king crab (RKC), Paralithodes camtschaticus, is an important commercial and subsistence fishery species in Alaska. The red king crab population in the Gulf of Alaska around Kodiak Island was fished commercially from the 1950s to the early 1980s; however, it crashed in the early 1980s and has not recovered.

Although the commercial fishery has been closed for decades, the Kodiak stock has not recovered. One potential solution to restore local populations of RKC in Kodiak, is the stocking of hatchery reared juveniles into recruitment-limited nursery habitats.

A collaboration among NOAA, commercial hatcheries and fishing groups, university groups, and State and Tribal governments called the Alaska King Crabs Research, Rehabilitation, and Biology (AKCRRAB) has formed to examine the feasibility of such a hatchery program. Substantial preliminary work has already laid the foundation for experimental releases and has included optimizing hatchery techniques for rearing RKC, field and laboratory experiments on RKC behavior, feeding, and predation, and field surveys of potential release areas around Kodiak.

The Kodiak lab is in its third year of studies examining survival and growth of RKC juveniles. In 2014, we examined the effects of density on the success of experiment releases. In 2015, we used similar methods to explore the effects juvenile size, and season.

Both of those experiments were performed on a small scale in a single location and have demonstrated that survival rates of released juvenile crabs make it likely that enhancement could be successful.

The next step is to scale up the releases to an area that will more closely mimic what occur during a real stock enhancement effort in a number of release areas. This will: 1) provide estimates on the spatial variability of growth and survival of juvenile RKC, 2) identify factors that influence a siteâ€™s suitability for enhancement, 3) provide proof-of-concept that enhancement can succeed at a realistic scale.

This will enable realistic economic analysis of red king crab stock enhancement and allow interested industry groups to take the first steps towards commercializing the technologies developed by the AKCRRAB program. 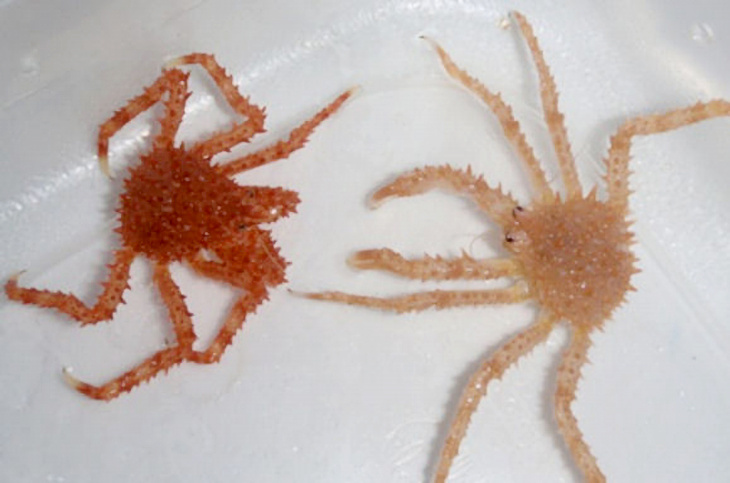 This color variation observed in hatchery-cultured red king crabs in an example of phenotypic plasticity. Crustaceans are known to adjust coloration based on diet and background color.

In an ongoing literature review of marine crustacean stock enhancement, researchers are assessing if perceived "deficiencies" acquired during hatchery culture should impede emerging stock enhancement initiatives. Numerous examples of behavioral and morphological differences between hatchery-cultured and wild individuals exist for a range of crustacean species; however, we submit that instances of phenotypic plasticity may be ultimately beneficial for stock enhancement because it provides potential for improved ecological competence with adjustments to rearing protocols. We examine how specific plastic responses can affect crustacean ecology through effects on predation, foraging, competition, and reproduction.

For developing stock enhancement programs, we recommend consideration of patterns of plasticity expression through exhaustive research before large-scale releases are initiated. Researchers must identify environmental factors that cue plasticity, determine if induced responses are ecologically relevant, and examine the temporal scale on which phenotypic plasticity operates. Researchers plan to publish findings in the peer-reviewed literature.