Did you know these marine mammals are part of the cetacean family? Check out these facts to learn more.

Marine mammals in the cetacean family include whales, dolphins, and porpoises. These animals are often referred to as “sentinels” of ocean health, providing insight into marine ecosystem dynamics. Learn more cool things about cetaceans below.

1. They tend to be social and live in groups. Cetaceans may communicate by slapping the water.

Dolphins and porpoises exhibit complex communication and echolocation by making squeaks, buzzes, whistles, and clicks that can be heard from miles away. They are also thought to communicate by slapping the water’s surface with their tails or bodies.

2. Killer whales are part of the dolphin family. There are three main types of killer whales, or ecotypes, in the North Pacific: Resident, Transient, and Offshore.

In fact, they are the largest member of the Delphinidae, or dolphin family. Members of this family include all dolphin species, as well as other larger species such as long-finned pilot whales and false killer whales, whose common names also contain "whale" instead of "dolphin."

Each North Pacific killer whale ecotype differs in appearance, diet, habitat, genetics, and behavior. While all three types share at least part of their habitats, they are not known to interbreed. Resident killer whales usually eat different varieties of fish, primarily salmon. Southern Resident killer whales prefer Chinook salmon, some of which are endangered. Transient (or Bigg’s) killer whales eat other marine mammals, such as seals, and squid. Offshore killer whales primarily eat sharks and scientists have discovered that the whales’ teeth are worn down over time due to sharks' rough skin.

3. Blue whales have the biggest hearts on the planet.

The heart of a blue whale weighs more than 1,000 pounds, the weight of an average dairy cow.

Learn more about the blue whale 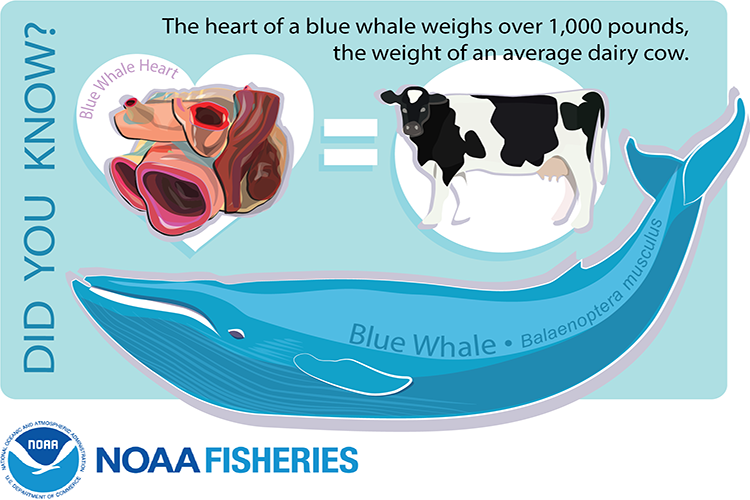 4. Dolphins are some of the most intelligent animals on Earth.

The dolphin's brain cortex features the same convoluted folds that are associated with human intelligence. Dolphins and their kin are the only marine mammals that have passed the mirror test of self-awareness.

5. They can be pretty fast swimmers!

Dall’s porpoises are considered the fastest swimmers among small cetaceans, reaching speeds of 34 miles per hour over short distances. They have 38 to 56 very small, spade-shaped teeth (about the size of a piece of grain or rice) on each jaw that are useful for grasping.
Learn more about the Dall’s porpoise

False killer whales can also swim at high speeds. The species behaves much more like a smaller dolphin, swimming quickly and leaping completely out of the water, particularly when attacking certain prey species. In Hawaiʻi, they are also known to throw fish high into the air before consuming them. False killer whales are so named because the shape of their skulls, not their external appearance, is similar to that of killer whales.
Learn more about the false killer whale

Instead of using their teeth to chew, dolphins grip fish with their teeth, then swallow the fish whole—head first—so the spines of the fish don't catch in their throats. Some NOAA Fisheries scientists have observed dolphins precisely biting the heads off of catfish in the Gulf of Mexico, to avoid the catfish spines. Dolphins that eat octopus will thrash them around first so they don’t choke on the clinging tentacles. Rough-toothed dolphins in Hawaii are specifically adapted for eating large fish like adult mahi-mahi.

7. Bryde’s whales can blow water 10 to 13 feet into the air when at the water’s surface.

They sometimes exhale while underwater as well. Additionally, Bryde’s (pronounced "broodus") whales can change directions unexpectedly when swimming. They sometimes generate short, powerful sounds that have low frequencies and sound like "moans."

They were once considered monotypic (belonging to one species), but two subspecies and a new species have now been discovered. The Bryde’s whale (Balaenoptera edeni brydei) is the larger form, found primarily in pelagic waters. Bryde’s/Eden’s whale (Balaenoptera edeni edeni) is a smaller form found in the Indian and western Pacific oceans, primarily in coastal waters. The Bryde's whale's "pygmy form" has only recently been described and is now known as Omura's whale (Balaenoptera omurai). And a new species, known as Rice’s whale, was recently described in the Gulf of Mexico. Scientists believe that there are fewer than 100 Rice’s whales in the Gulf of Mexico.

Learn more about the new species

8. Whales have a role in potentially helping to combat climate change.

Marine biologists have recently discovered that whales—especially the great whales—play a significant role in capturing carbon from the atmosphere. Whales accumulate carbon in their bodies during their long lives. When they die, they sink to the bottom of the ocean. Each great whale sequesters 33 tons of carbon dioxide on average, taking that carbon out of the atmosphere for centuries. A tree, meanwhile, absorbs only up to 48 pounds of CO2 a year.
Learn more about how protecting whales could help combat climate change

In fact, one study found that whale poop acts as a natural "nutrient pump" for enriching rainforests. The whale poop gives nutrients to the plankton, which are microscopic organisms that then become food for smaller fish. These organisms are then eaten by seabirds which deposit their own poop on land or may feed larger migratory birds. The nutrients from this system also reach to the rainforest and land if the animals that contain them are eaten by predators from the land, such as birds or cats. These ocean nutrients are important for massive biomes like the Amazon.

Learn more about about the power of whale poop

10. Whales and dolphins were once land mammals before they evolved into the ocean-going mammals we see today.

Just like humans, some dolphin species have hair, called lanugo, on their bodies shortly after birth. This hair is later shed.

Whales and dolphins still need to breathe air, so how do they sleep underwater? In what is called unihemispheric sleep, they only rest half of their brain while the other half stays awake to breathe. Also, most whale and dolphin respiratory and digestive tracts are completely separate, so they don't get water in their lungs when feeding underwater.

11.Whales and dolphins can be very creative hunters and some even use tools!

Killer whales have been observed using their large size and speed to create waves that can knock seals off ice floes and into the water. Humpback whales use a technique called "bubble net feeding" to corral plankton and small fish near the surface of the water where they can easily catch them in one gulp. Bottlenose dolphins use a similar technique called "mud-ring feeding," where they stir up a plume of mud with their tail causing fish to jump out of the water into the mouths of waiting dolphins. One case of cetacean tool use involves a subset (approximately 5 percent) of the population of bottlenose dolphins in Shark Bay, Australia. These dolphins tear basket sponges from the seabed and wear them over their beaks for protection while foraging along the seafloor.

Last updated by Office of Communications on February 18, 2021