Every two to three years, scientists capture and tag sharks along the southeast Atlantic coast to collect a variety of data. This year’s survey captured nearly 2,500 from 11 different shark species. 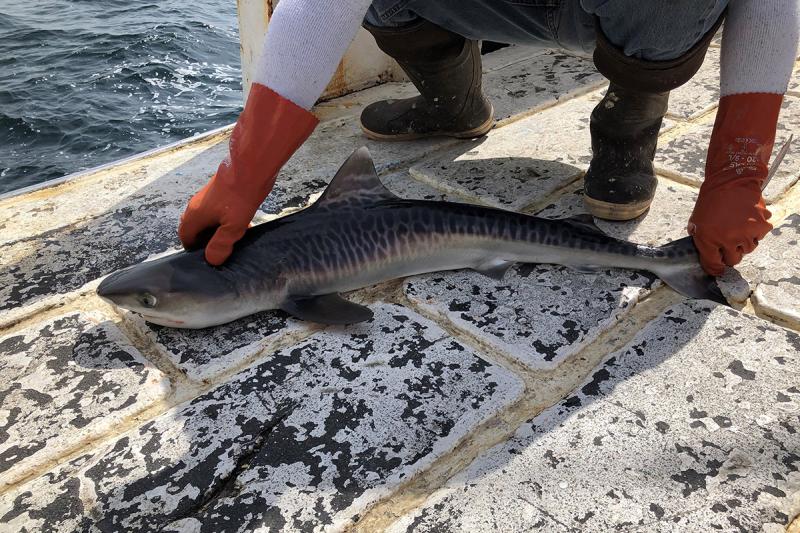 Sandbar sharks were the most common shark caught during the 2021 Large Coastal Shark Bottom Longline Survey. This survey of large and small coastal sharks was conducted from April 12 to May 28 by scientists from the Northeast Fisheries Science Center’s Apex Predators Program.

The survey is conducted in U.S. waters from Florida to the mid-Atlantic area every two to three years to provide relative abundance indices of coastal shark populations. Working from the contracted commercial longline vessel F/V Eagle Eye II, scientists from the center’s Narragansett Laboratory in Rhode Island and vessel crew caught 2,462 sharks of 11 species. The vessel left Port Royal, South Carolina to begin the survey just south of Fort Pierce, Florida. The survey ended at the North Carolina–Virginia border.

“We had a lot of weather delays this year, but we were still able to complete the majority of stations we cover each survey,” said Cami McCandless, who along with Lisa Natanson were the two scientists on board for the survey. Both are from the center’s Apex Predators Program based at the Narragansett Laboratory. Natanson has been the chief scientist on this survey since its inception in 1996. She retired in 2020 but returned this year to help lead the survey one last time before handing over the reins.

“The survey was designed to sample coastal sharks just prior to their northward migration along the coast,” Natanson said. “The 47-day survey consistently occurs in early to mid-April and ends at the Memorial Day weekend. Since the inception of the survey, there has been an increase in weather days. This has resulted in a decrease in the number of stations although the geographic extent of the survey has remained the same over the years.”

Sandbar sharks accounted for 70 percent of the shark catch and were mostly larger juveniles and adults. Other species included:

The results represent a change in species composition from the last survey, conducted in 2018. During that survey, sandbar sharks were still the primary species followed by dusky sharks, but blacktip sharks were third in abundance, followed by Atlantic sharpnose, tiger, and scalloped hammerhead sharks.

NOAA Fisheries Cooperative Shark Tagging Program tags were attached to 2,132 sharks representing 10 species before they were released. 202 animals, a subset of the original 2,132, were also injected with oxytetracycline for age validation studies. A 9-foot female white shark was also tagged with a 10-year archival tag provided by Greg Skomal of the Massachusetts Division of Marine Fisheries for a shark study he is leading.

In addition, 10 sharks previously tagged with Cooperative Shark Tagging Program tags were caught, along with two fish, a sandbar shark, and a cobia, each with a Virginia Institute of Marine Science tag. One of the recaptured sharks on the recent survey was a sandbar shark tagged years ago by McCandless during the Cooperative Atlantic States Shark Pupping and Nursery (COASTSPAN) survey in Delaware Bay.

“This was a female sandbar tagged as a 1-year-old during our July survey and was recaptured 15 years later this April off Georgia,” McCandless said. “I hope to see her again in Delaware Bay, maybe when she comes back to give birth to her own pups. She is within the size and age range for mature females, but we saw no clear indication that she was pregnant this year.”

Although the goal of the survey is to capture, tag, and release animals, sometimes sharks die during capture. These animals are sampled for other studies. During the survey, sharks representing eight species were brought on board and sampled for age and growth, reproductive, and food habits studies. Reproductive information was obtained from 59 sharks, backbones were removed for age and growth research from 75 sharks, and stomachs were examined from 18 sharks. Morphometric data—detailing size and shape—were also collected on all undamaged sharks brought on board.

McCandless leads the COASTSPAN program and will be leaving this month, along with other center colleagues, to survey the sharks of Delaware Bay. This is the second of three consecutive monthly surveys to monitor the summer pupping and nursery season in the bay.

The Apex Predators Program also manages the Cooperative Shark Tagging Program, which started in 1962. It is the longest running shark tagging program in the world and NOAA Fisheries’ oldest citizen science program. 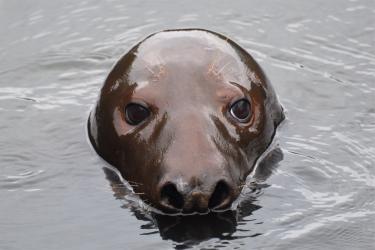