Research provides a glimpse into the future to help Arctic subsistence fishing communities prepare for change. 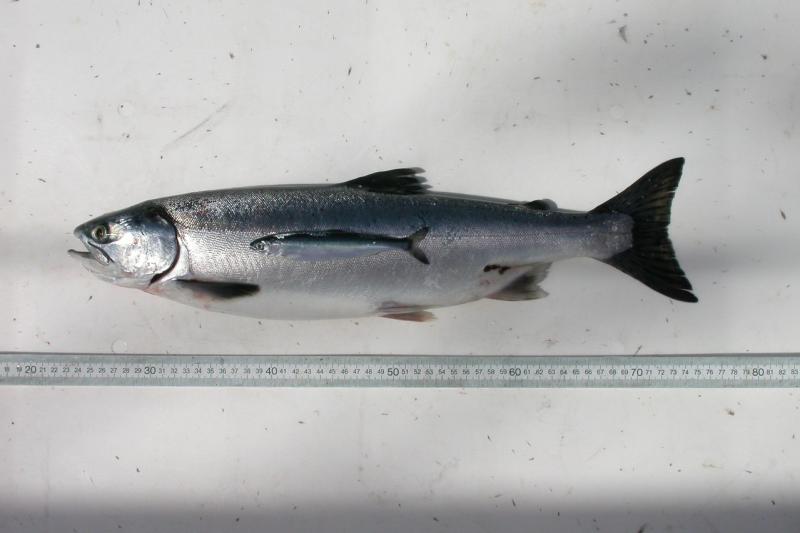 The Pacific Arctic is undergoing a rapid transformation. As temperatures rise and sea ice melts, some species will do better than others. A 2020 study suggests that pink salmon may be one of those species.

“Our results suggest that warming is both increasing freshwater habitat and improving early marine survival of pink salmon in the northern Bering Sea,” said Ed Farley, NOAA Fisheries biologist at the Alaska Fisheries Science Center, who led the study.

The study provides insight into the response of pink salmon to climate change. The findings are valuable information for commercial and subsistence fisheries, and fishing communities, preparing for future changes.

“Subsistence harvesters would like to know what foods may be available to them now and into the future,” Farley said.

“The importance of fish in Arctic subsistence economies cannot be overstated; they are some of the most commonly eaten foods,” said coauthor Todd Sformo, biologist at the North Slope Borough Department of Wildlife Management.

“In the past on the North Slope, salmon have been used for dog food and even considered nuisance fish when interfering with preferred species such as aanaakliq (or broad whitefish) in the inland rivers. Recently, there seems to be a change both qualitatively and quantitatively in the use of salmon as a main dish and for smoking.

“Participating in this study allowed me to present a subsistence perspective, learn how fellow researchers measure production dynamics, and better understand how pink salmon are responding to climate warming in the northern Bering Sea. While this research is further south than the waters surrounding the North Slope, it is a beginning of our attempt to account for potential change in subsistence fishing.”

Pink salmon are the most abundant salmon species in the North Pacific Ocean. Over the last decade, their production has increased.

The Pacific Arctic is part of the North Pacific Ocean. It encompasses the Chukchi and northern Bering seas. The Pacific Arctic marine ecosystem, like other high latitude regions, is on the forefront of climate change.

“We’ve been working in the north Bering Sea for about 20 years, and sporadically in the high Arctic. It has changed dramatically in that time. We didn’t expect to see this much loss of sea ice for 20 more years,” said Farley. “But it is already happening.  The ecosystem is transforming. Seabirds have shifted from fish-eating species to plankton-eating species. Fish such as walleye pollock and Pacific cod are moving north in large numbers. And we are seeing big changes in salmon populations.”

Pink salmon have been in the Pacific Arctic region for thousands of years, but in relatively low numbers. Abundance in the Arctic remains low compared to areas further south, but that may be changing.

Pink salmon have a 2-year life cycle, spent in both freshwater and marine environments. Due to this short life cycle, they respond rapidly to ecosystem change. That means pink salmon can provide unique insight into impacts of warming on the Arctic ecosystem.

“A community-based monitoring effort called Arctic Salmon has documented a general trend of more pink salmon being harvested in more places across the Canadian Arctic, especially over the last 10-15 years,” said Karen Dunmall, biologist at Fisheries and Oceans Canada. “While we do not believe that pink salmon have yet successfully established in the Canadian Arctic, these harvests indicate larger changes in the marine ecosystem. They are an obvious and tangible example of the influence of climate change on fish biodiversity in the Arctic.”

“We think pink salmon are moving north, seeking new territory as the population grows in the south. Until now, cold temperatures in freshwater rivers and streams were believed to limit pink salmon spawning in northern regions. As the region warms, more areas may open for spawning. There is also evidence that warmer sea temperatures benefit juvenile pink salmon early marine growth,” said Farley. “ Is the Arctic ecosystem system ready? Are pink salmon now able to become viable, sustainable populations in the Pacific Arctic? ”

To better understand pink salmon dynamics in the Pacific Arctic, the team developed models based on 23 years (1995-2018) of data from multiple sources.

The number of pink salmon that return to a river each year is a function of the number of adult spawners two years prior. It also depends on events that affect survival during critical life periods in both freshwater and marine residence.

“The most exciting thing about this study was being able to link our survey data to changes in ecosystems and climate, to see how fish respond to shifts. We connected pink salmon dynamics from juvenile abundance to adult returns. That had not been done in this region,” said Farley. “Our analysis suggests that pink salmon production in the northeastern Bering Sea is driven by freshwater and early marine habitat dynamics. Conditions in those environments are key to our understanding of pink salmon production dynamics in this region. And conditions under climate change may benefit pink salmon in the Pacific Arctic.”

The abundance of juvenile pink salmon in the marine environment showed a significant positive relationship with Nome air temperature. This relationship suggests that warming rivers and streams may open new areas to spawning and improve freshwater survival. More freshwater production leads to higher numbers of juvenile pink salmon in the northeastern Bering Sea in summer. 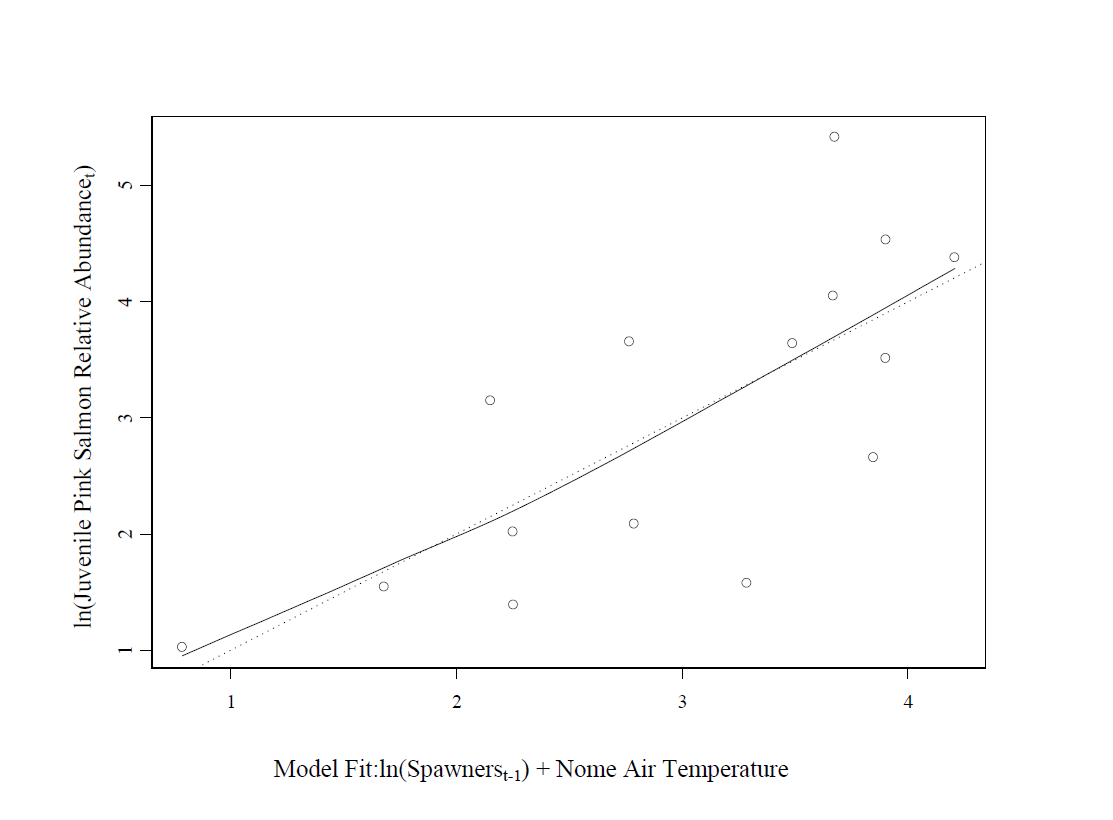 Juvenile abundance in the northern Bering sea increased with the number of spawners and Nome air temperature, a proxy for freshwater river and stream temperature. Figure: NOAA Fisheries.

The number of adult pink salmon returning to Norton Sound and the Yukon River was strongly related to juvenile abundance in the northern Bering Sea. This indicates that much of the variability in survival over the life of a salmon occurs in the early stages. Therefore, improved juvenile survival means higher pink salmon runs to the region. 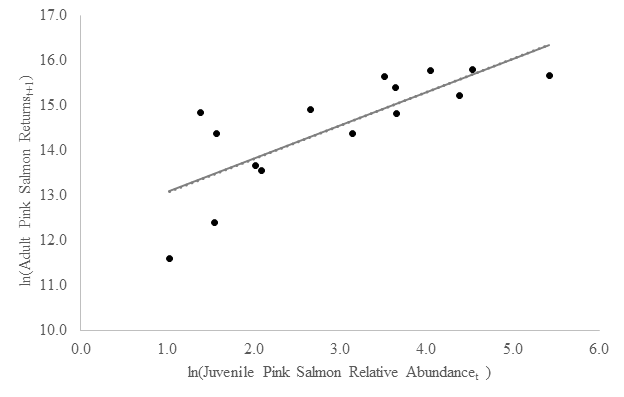 Juvenile pink salmon abundance in the northern Bering Sea is a leading indicator of the number of adult pink salmon returns to the Yukon River and Norton Sound region. Figure: NOAA Fisheries.

The models showed that production may not be limited by density-dependence in some northern spawning grounds. This means that as Arctic streams get warmer, there may be potential for increased spawning habitat. That,  along with a longer growing season for salmon, could lead to increased freshwater production.

Patterns of salmon productivity over time were synchronous across the region. This suggests that shared factors are affecting different stocks in the study area. The models suggest that  warmer sea surface temperatures are important to pink salmon production across the northeastern Bering Sea.

Pink salmon returns in this region have historically been higher during even years. Recently, odd-year returns to Norton Sound have increased. Previous studies suggest that early stages of even-year brood lines do better in cold water. Increasing dominance of odd-year brood lines has been linked to warming freshwater habitats.

The difference in temperature tolerance between even- and odd-year brood lines may be traced to Pleistocene Era glaciation. Even year brood lines are thought to have survived the glaciation in northern refugia, while their odd-year counterparts took refuge in the south. Warming freshwater in the northern Bering Sea may be improving odd-year brood line survival, leading to higher adult pink salmon returns in odd years.

Looking into the Future

Farley emphasizes the importance of continued monitoring of freshwater temperature and flow, ice dynamics, and salmon throughout their life cycle. This will help us to better understand how warming Arctic climate conditions will impact critical life stages of salmon. He stresses the need for local knowledge of streams, salmon abundance, and spawning locations to fine-tune current observations.

“I think we have a glimpse into the future,” said Farly. “Pink salmon are going to be more abundant, and we will see subarctic fish move into the Arctic. People said this was going to happen someday, but we have watched a dramatic transformation in the last few years. That is something I didn’t expect to see in my lifetime. Having a better understanding of what we can expect in the future will help us prepare for the changes to come.”

The Arctic is warming twice as fast as anywhere else on Earth.