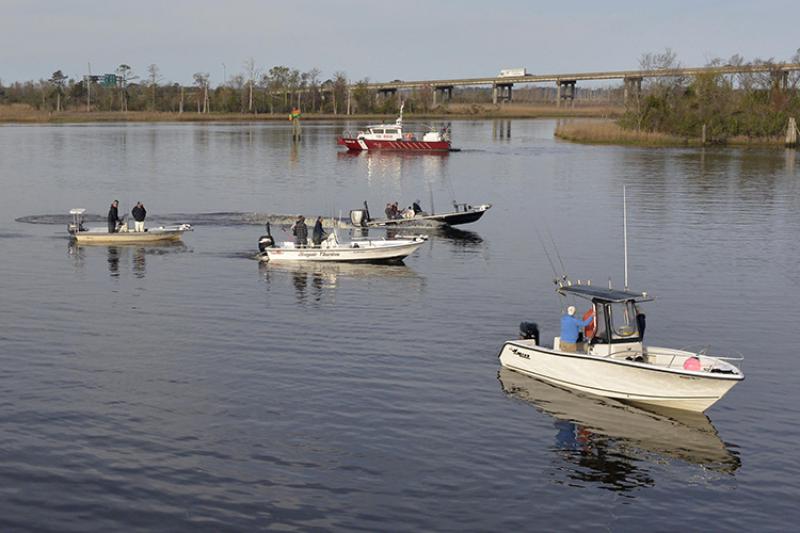 The StriperFest fishing competition is one of countless recreational opportunities on the Cape Fear River. Credit: Alan Cradick.

Fish rely on healthy habitats to eat, grow, and reproduce—but habitats benefit people, too. When NOAA works to restore habitat for fish, we also support the local communities that rely on those habitats for clean drinking water, flood and storm protection, and industries like boating, fishing, and tourism. In North Carolina, our work with partners to restore habitat in the Cape Fear River is also preserving valuable cultural and economic benefits.

As the only major river in North Carolina flowing directly into the Atlantic Ocean, the Cape Fear River serves as critical habitat for migratory fish. Species like American shad, river herring, Atlantic sturgeon, shortnose sturgeon, and striped bass spend most of their lives in the ocean but return to the river’s freshwater streams to spawn.

Over the past two hundred years, however, the Cape Fear River’s once-thriving populations of migratory fish have sharply declined. Pollution from agriculture and development has led to unhealthy water quality, and dams and other barriers block fish from migrating to the upstream areas where they reproduce. These declines have resulted in moratoriums and fishing restrictions for river herring, striped bass, and American shad. Both Atlantic and shortnose sturgeon, once abundant in the Cape Fear River, are listed as endangered. 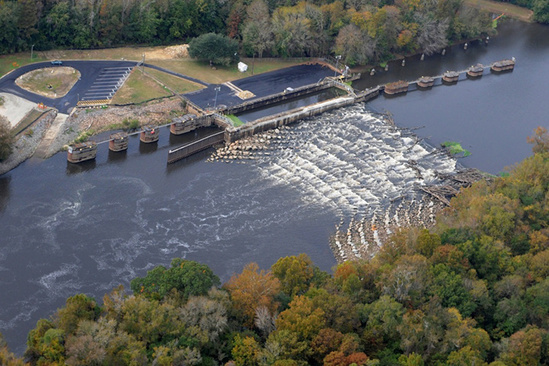 A fish passage structure at Lock and Dam No. 1 on the Cape Fear River allows migratory fish to swim upstream to spawn. Credit: Alan Cradick.

Of the barriers currently preventing fish migration in the Cape Fear River, three “lock and dam” structures in the middle portion of the river present the biggest challenges. At Lock and Dam No. 1, a fish passage project completed in 2012 allows migratory fish to travel upstream. Over the next several years, we are working with our partners to improve the existing fish passage at Lock and Dam No. 1 and to construct additional fish passages at Lock and Dams No. 2 and No. 3. We will also monitor fish passage, conduct surveys, and analyze striped bass populations to determine if fish stocking is warranted. 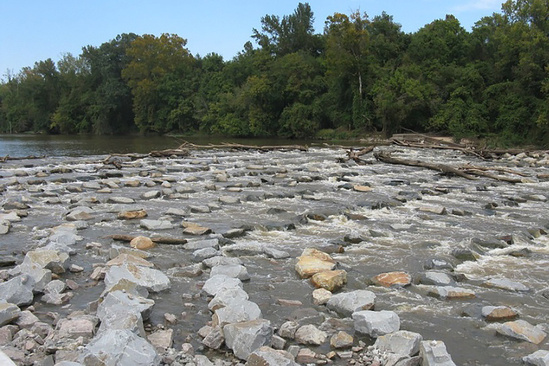 The fish passage structure at Lock and Dam No. 1 mimics natural rapids. As fish make their way upstream, they are able to rest in the pools at each tier. Credit: U.S. Army Corps of Engineers.

By conserving migratory fish, we can in turn protect the opportunities they provide to communities. Fisheries in the Cape Fear River offer countless cultural and economic benefits to the region’s many residents and visitors, serving as a source of recreation, food, jobs, and income. In 2013, fisheries in the river supported nearly 500 jobs, $14.2 million in income, and $35.7 million in business sales. State-wide, anglers in North Carolina spent more than $1.5 billion on fishing-related activities in 2011, and the tourism and recreation industries employed more than 33,000 people in 2010.

The work of the Cape Fear River Partnership is expected to result in cleaner water, more habitat, and better access to habitat for migratory fish. Rebuilding healthy fish populations will also benefit local communities and businesses, such as recreational and commercial fishermen, boat tour guides, tackle shops, restaurants, and more. Through the restoration efforts of NOAA and our many partners, the Cape Fear River can continue to support the fisheries and people that depend on it.

Last updated by Office of Habitat Conservation on February 24, 2022