Since July, satellite tags have been collecting data about fur seal foraging behavior while autonomous Saildrones collect data on fur seal prey. Now it’s time to recover that data—and that requires a down to earth approach. 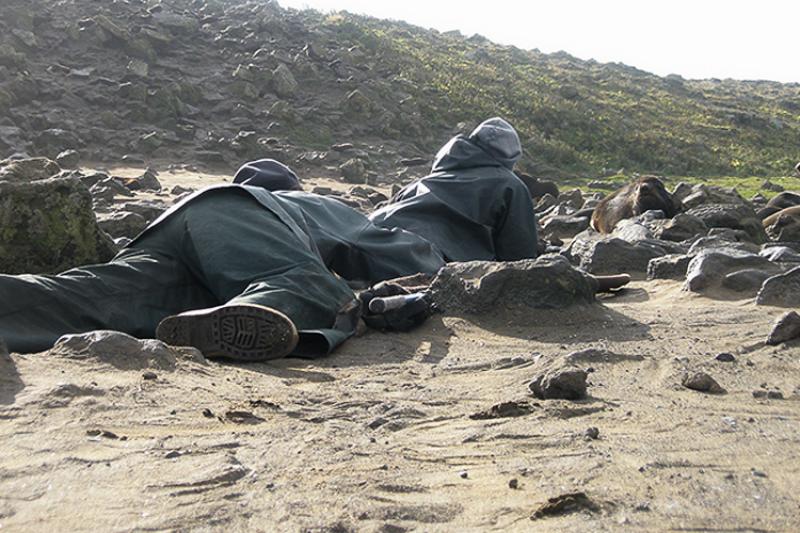 Carey Kuhn begins her day by climbing into a wooden box with two of her coworkers. On three, they pick up the box and trot to the workplace, Flintstone’s style. They park near a harem guarded by a large, aggressive male, and get to work.

That’s what Kuhn and her colleagues from the Alaska Fisheries Science Center’s Marine Mammal Laboratory are doing this month. As part of their study of the relationship between Pribilof Islands northern fur seals and their prey, the team tagged 30 females in July to track their foraging behavior. Since then, the tags have been transmitting the seals’ locations via satellite, but have also been storing highly detailed data about the seals’ diving behavior and environment. Now it is time to recover the tags with this wealth of data. But first they have to catch the seals.

As it turns out, the way to approach a fur seal depends on its mood—and that depends on the season.

“Our goal at all times is to minimize disturbance, protect the seals, and protect ourselves,” says Kuhn. “During the July breeding season, males are very protective of their harems and keep them in a close group. The females also want to stay close to their pups, who may be only days old. The seals are wary of humans, but when we’re in the box we can get close without disturbing them much. The male would attack us if we approached without it, but when the box moves into his territory, he just looks at us like, what?”

“Hidden” in their box next to the harem, the team pulls a mother-pup pair into the box. The scientists glue a tag onto the female’s fur, and weigh and measure mom and pup before releasing them back into the harem. 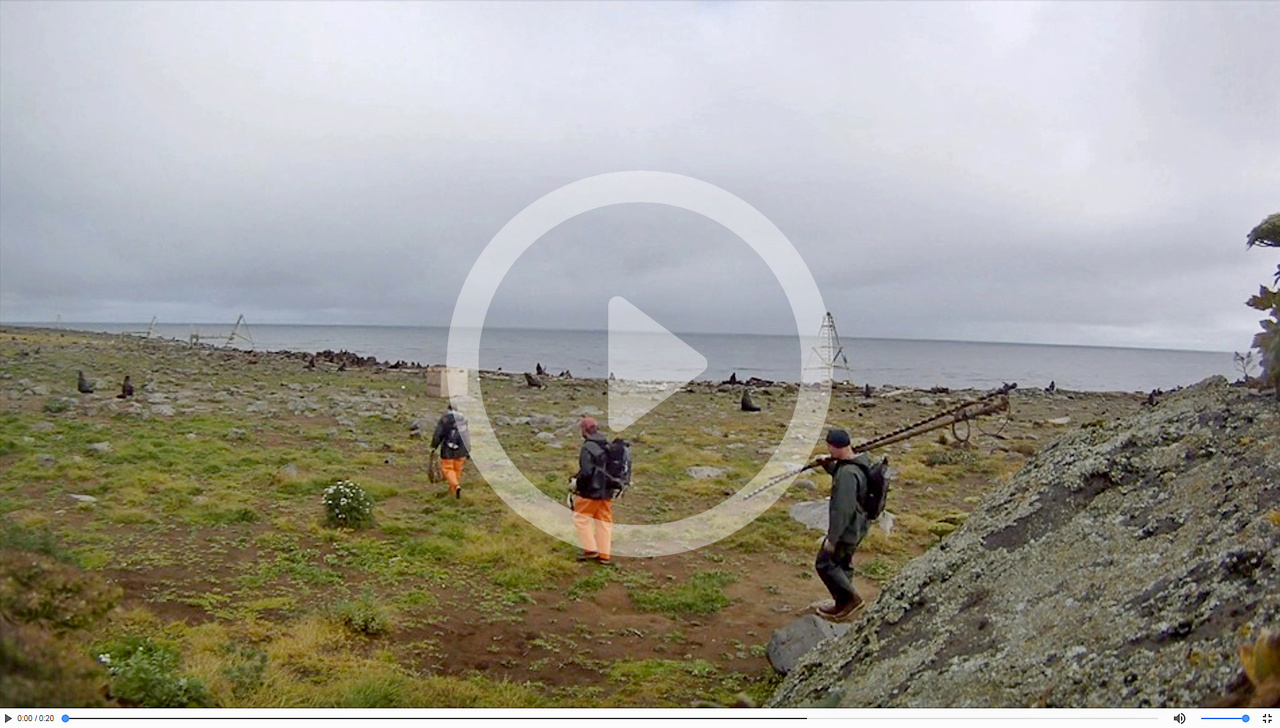 Recovering the tags now, in the fall, requires a new approach.

“Males are no longer guarding harems - they lose interest once the females have bred. The females have moved out of tight groups and are spread out around the rookery, nursing their pups. Now that their pups are older, the females are more likely to run if they see us coming,” Kuhn explains. “So we use a radio transmitter to find each female, and a lot of stealth to approach her. We get on our bellies and crawl through the rookery, carrying a sort of seal-sized butterfly net. We get as close as we can on our bellies - then it’s a sprint.”

Once they have caught a female and pup, the scientists will trim the data-filled tags from the female’s fur, and again weigh both mother and pup. The first part of the process may be especially challenging this year.

“We have to make sure we pair the right pup with the right mom. The pups are unmarked, and they are bigger and more mobile now. There are pups everywhere! We have to find them nursing or right next to mom to be sure they are hers. Also, this year we have a large number of tags to recover. Usually we tag about 15 females—this year we tagged twice as many.”

Kuhn has been tracking Pribilof Island fur seals for more than 10 years, but this year offers an unprecedented opportunity to learn more about them. Though northern fur seals are one of the most studied marine mammals, no one can explain why the Pribilof Island population has declined since the mid-1970s. A critical piece of missing information is the relationship between fur seals and their main food source, walleye pollock. Now Kuhn’s team is using cutting-edge technology to begin to fill that information gap.

“Saildrone technology gives us the ability to do something we’ve never been able to do, but always needed to: directly compare seal foraging with fish resources,” says Kuhn.

Saildrones are uncrewed vessels that operate on wind and solar power, and they are able to go places that people are not easily, or cost-efficiently, able to go. This summer two Saildrones were programmed to collect data on the location, depth, and number of fish within the feeding grounds of the seals, at the same time that the tagged seals were collecting data about their own foraging behavior. Alex De Robertis, a fisheries biologist at the Alaska Fisheries Science Center, will analyse the fish data collected by the Saildrones.

In the meantime, check out Kuhn’s blog for reports direct from the field, where she will be belly-crawling her way to a better understanding of Pribilof fur seals.

*Note: Research conducted and photos collected under the authority of MMPA Permit No. 14327