What can a bottle of water collected from the ocean tell scientists about the fish that live there? Plenty, says new study. 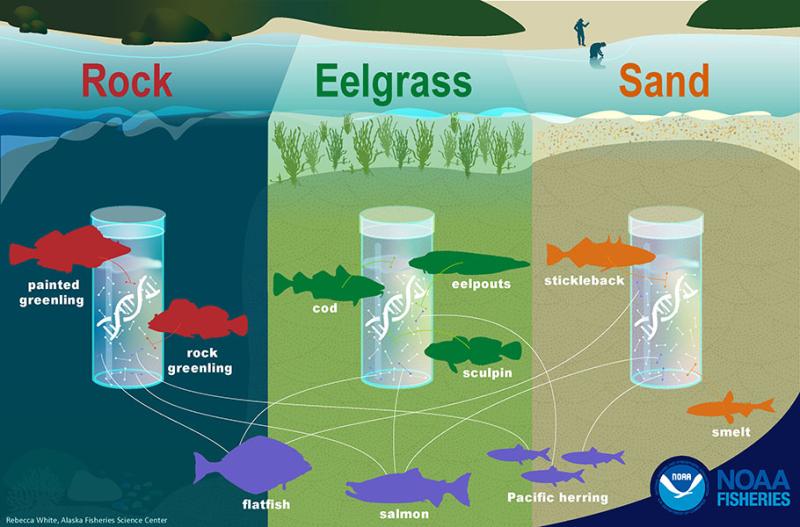 All organisms shed DNA into the environment. Environmental DNA (eDNA) can be used to determine the identities of the fish species that are present at or near the time of sample collection. Credit: NOAA Fisheries

Alaska, known for its vast geography and cold, productive waters, supports some of the most valuable fisheries in the world. However, Alaska’s northern latitudes, diverse coastal habitats, and dynamic ocean conditions make studying these fisheries particularly challenging.

“Environmental or eDNA can revolutionize how we assess nearshore fish communities in Alaska,” said Wes Larson, manager of the science center’s genetics program. “Traditionally, the only way to sample nearshore fish communities is by using beach seines or similar gear types set from either shore or small boats. Now we have another technique for generating similar data sets analyzing a simple water sample with eDNA metabarcoding.”

Larson is lead author of the collaborative study recently published in Environmental DNA. As the first eDNA metabarcoding study published on marine fish communities in Alaska, the main goals were to:

What Is eDNA Metabarcoding?

eDNA is the genetic material shed by organisms into the surrounding environment. For example, as a fish swims through the ocean, its DNA is shed and accumulates in the water around it. Some sources of eDNA include scales, skin cells, mucus, feces, and gametes. This genetic material can be recovered from environmental samples and used to detect the presence of the fish even after it has moved through the area.

After an environmental sample — in this case, 1 liter of water — is collected and filtered, the DNA is extracted and analyzed using eDNA metabarcoding.

eDNA metabarcoding is a method of species identification that compares short sections of DNA (also known as “sequences”) with a reference library of known sequences. This is similar to how a supermarket scanner uses the familiar black stripes of the UPC barcode to identify an item in its stock against its reference database. Metabarcoding does not focus on one specific organism. Instead, it provides a snapshot of entire communities across taxonomic groups from a single standardized sample.

Influence of Habitat and Tides

Larson suspects that differences in fish communities across these habitats could be driven by physical characteristics (shoreline slope and bottom depth). Bottom depths at sampling locations in rock habitats were often deeper, with slopes that descend rapidly from the collection location. In contrast, sand and eelgrass environments are characterized by more gradual slopes.

“The lower detection rates for some fish species in rocky habitats could be a function of sampling farther from the seafloor in areas where water is not well mixed between the bottom and the surface,” said Larson.

In rocky habitats, the halocline (the border between layers of water that contain different amounts of salt) may act as a barrier to eDNA movement, effectively trapping surface and bottom sourced eDNA in their respective layers. The halocline may be especially pronounced in coastal southeast Alaska due to large freshwater inputs from rivers, glaciers, and precipitation.

The authors also found that tide height did not significantly influence which fish were detected except for in sand habitats. For example, the high tide sample taken at the Eagle Beach field site contained many more small open ocean fish (stickleback, smelt, Pacific herring) than the low tide sample. Larson and his coauthors hypothesized that these small pelagic fish may be moving inshore during high tide to avoid predators or to take advantage of a food source.

This study demonstrates how eDNA metabarcoding can be used to characterize nearshore fish communities in a high-latitude marine environment. These ecosystems are influenced by large tidal swings, strong currents, and significant freshwater input from large rivers, rain, and snowmelt.

The authors concluded that marine eDNA transport was minimal, with many of the eDNA detections coming from locally abundant species. They also noted that the majority of species in the fish community were detected with eDNA regardless of tidal stage.

Larson is eager to build on this research and apply eDNA analysis to many more questions and systems. He suggested future studies could explore the extent to which habitat and nearshore physical processes influence eDNA detections.

Larson adds, "This study provides important information about how physical factors influence the fish we detect from eDNA. We can use this information for future studies sampling eDNA throughout Alaska waters."

This study provides a small peek into what researchers think is a very exciting future for eDNA in Alaska.

Gretchen Harrington at the Alaska Regional Office’s Habitat Conservation Division who helped fund this work said that she is “excited about the potential of eDNA for assessing species diversity, informing environmental assessments related to new development and other projects, and identifying habitat that is essential for important fish species.“ The NOAA Alaska Fisheries Science Center is developing a robust eDNA program to help answer these questions and many more. Harrington hopes this work will help fisheries managers steward important resources in the face of rapid environmental change.