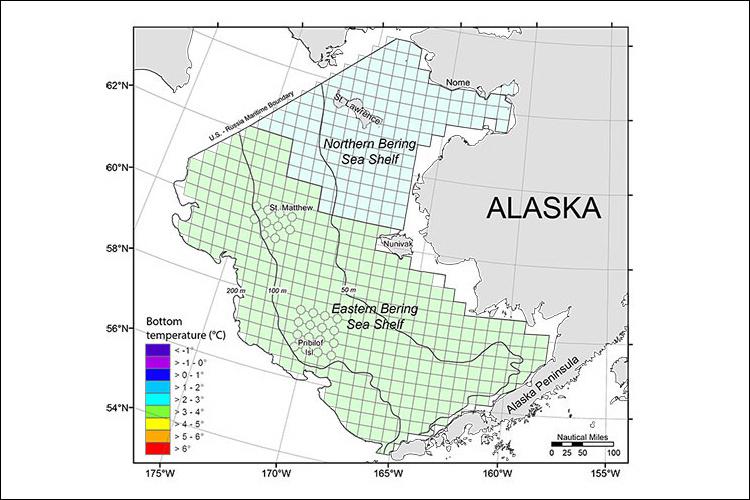 The map shows the sampling grid for the 2017 eastern and northern Bering Sea shelf bottom trawl survey (June 1 and August 30, 2017). The map will be updated several times each week to show the progress of the survey vessels and the bottom temperature (℃) in each 20 x 20 nautical mile grid cell.

For nearly four decades, NOAA Fisheries has been conducting annual bottom trawl surveys of the eastern Bering Sea continental shelf. We collect information on the status and trends of commercially important fish, crabs and other species including walleye pollock, Pacific cod, Greenland turbot, yellowfin sole, northern rock sole, red king crab, snow, and Tanner crabs. Other information collected during the survey enables us to gain further insights into the behavior, diets and life span of these marine animals along with the ecological and physical factors that affect their distribution and abundance. Having long term information for such a broad area is very useful for studying changes in the community of marine animals over time. These surveys are key to conserving and managing our nation’s living marine resources. Scientists are conducting the survey from two commercial fishing vessels -- FVs Alaska Knight and Vesteraalen. For only the second time since 2010, the study will be expanded to include the entire northern Bering Sea shelf. We will be collaborating with scientists from the Alaska Department of Fish and Game, United States Coast Guard Academy, Oregon State University, International Pacific Halibut Commission, University of Washington, the Norton Sound Economic Development Corporation, and NOAA Fisheries’ Northeast Fisheries Science Center.