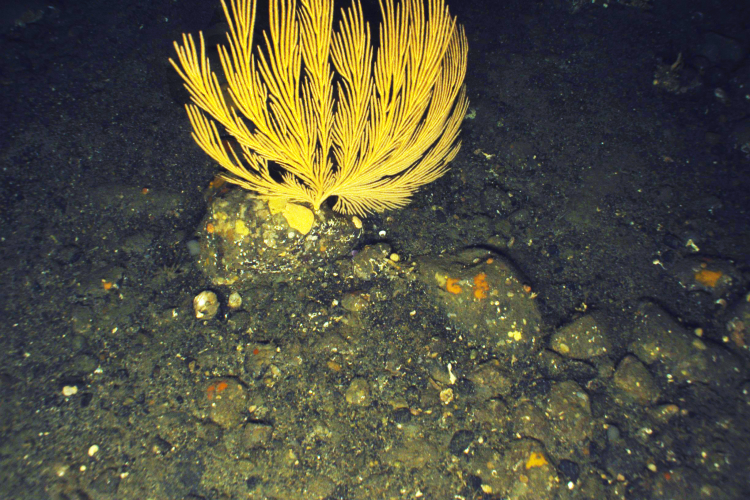 During our most recent dive we encountered more interesting deep sea creatures whose relationships with each other create the deep sea ecosystems of the Gulf of Alaska.

Deep-sea corals are widespread throughout Alaska, including the continental shelf and upper slope of the Gulf of Alaska, the Aleutian Islands, the eastern Bering Sea, and extending as far north as the Beaufort Sea. Many grow very slowly. During the survey, as mentioned in post 4, we found tentacled bamboo coral. Changes due to both natural disturbance and some human activities can affect their rate of growth and may have profound effects that can linger for decades.

Arrowtooth flounder (Atheresthes stomias) is a relatively large flatfish and one of the most abundant fish in the Gulf of Alaska. It plays an important role in Alaska's complex marine food chain. It feeds extensively on the commercially important walleye pollock and in turn is an important part of the diet of Steller sea lions. In Alaska, NOAA Fisheries scientists and the flatfish fishing industry collaborated to develop changes to fishing gear that would reduce effects of flatfish trawling on seafloor habitats of the central Gulf of Alaska and the eastern Bering Sea shelf. The modified gear they developed –Bering Sea flatfish gear– not only reduced impacts to seafloor habitat and the animals living there but also reduced the fishery’s impacts on crabs. In the central Gulf of Alaska and Bering Sea areas, flatfish fishermen are now required to use this modified fishing gear.

Dusky rockfish (Sebastes variabilis) have one of the most northerly distributions of all rockfish species in the Pacific. They range from southern British Columbia north to the Bering Sea and west to Japan, but are abundant only in the Gulf of Alaska (GOA).

Callogorgia compressa is a type of soft coral in the family Primnoidae. Callogorgiahave a fan shaped body structure that often serves as a habitat for other organisms.

Certain brittle stars have a commensal relationship with these corals. The brittle stars benefit from the elevation provided by Callogorgia allowing them to suspension feed.

Cat sharks use Callogorgia as a nursery habitat by depositing their egg cases on the branches. Callogorgiahas also formed associations with copepods, zoanthids, and scale worms.

A slime star (Pteraster tesselatus). The slime star feeds on various benthic invertebrates, including sponges, the false jingle shell, scallops, clams, and colonial sea squirts. If attacked by a predator such as a sunflower star (Pycnopodia helianthoides), the slime star emits great quantities of repellent mucus and can often evade the predator.

Thanks for checking out this blog! If you got this far, you’re likely hungry for more. If so, check out another blog: EcoFOCI's Spring Mooring Cruise.

Previous: Innovation to Learn More About Alaska's Deep-Sea Corals and the Species that Live There Post #7