We have successfully completed Day 2 of surveying Glacier Bay National Park for some of the northern headlands in the bay. Today’s survey included imaging of Reid Glacier (see image below), the first of many tidewater glaciers to come. So far, the flight crew has been able to generally stick to their flight plan.

Glacier Bay National Park & Preserve 2018 facts (National Park Service): Two hundred and fifty years ago a single, large tidewater glacier covered all of Glacier Bay. By 1750 the glacier began to retreat and has now retreated 60 miles to the head of the bay. At last count there were 1, 045 glaciers in the Park. There are over 50 named glaciers, seven of which are active tidewater glaciers that calve icebergs into the sea. In general, tidewater and terrestrial glaciers in the Park have been thinning and receding over the last several decades. Exceptions include the Johns Hopkins and Margerie glaciers. 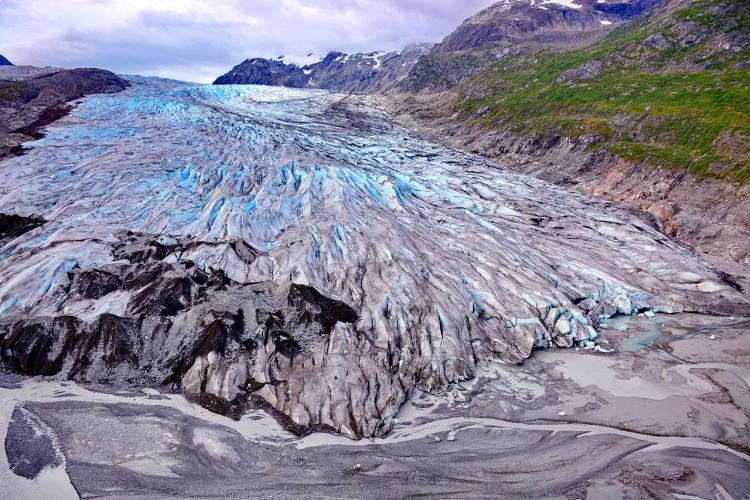 Reid Glacier is about 3/4 mile wide, 150 feet high, and over 10 miles long. Like Lamplugh Glacier to the west, it originates in the Brady Icefield. Both the eastern third and western third of the glacier is now grounded and basically terrestrial. Only the central area with its deep blue ice is affected by high tides when calving may occur. Water is shallow along the ice face. This glacier is close to becoming grounded and no longer considered tidewater. Sediment deposited from streams draining out of the glacier on the eastern and western margins is gradually filling the inlet in front of the glacier, the deposits being exposed at low tides. The center of the glacier continues to slowly recede at about 30 to 50 feet per year, while the remainder of the margin has been receding at about 30 feet per year or less while progressively thinning. Crevasses that characterized Reid Glacier within its terminus region since the early 1900’s are slowly closing as flow rates decrease and the terminus becomes terrestrial. The glacier-filled all of Reid Inlet in 1899 and has slowly receded to its current position since that time. On the walls of the fjord, lateral deposits of the glacier extend from near the waterline up and along the bedrock face, and mark the positions and thickness of the ice at locations where it remained stable for some period of time during this overall period of recession. 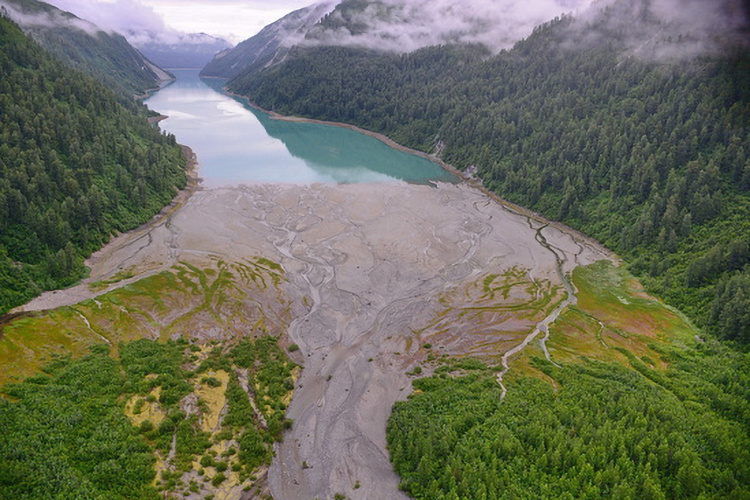 This inlet no longer has a tidewater glacier but some characteristics of its presence remain as glacial succession progresses. A long narrow inlet has been carved out by the glacier and is now flanked by a coniferous forest down to the tidal zone. The river delta at the head of this inlet has been filled in with glacial sediments as erosional processes continue in the uplands. These sediments are still being actively deposited and moved around by tidal and riverine forces preventing stabilizing colonization by marine or brackish biota. However, the upper tidal zone is flanked by patches of sedges and grasses which can expand and mature as conditions become more favorable. Geologically speaking it probably wasn’t so long ago that this inlet had a tidewater glacier. 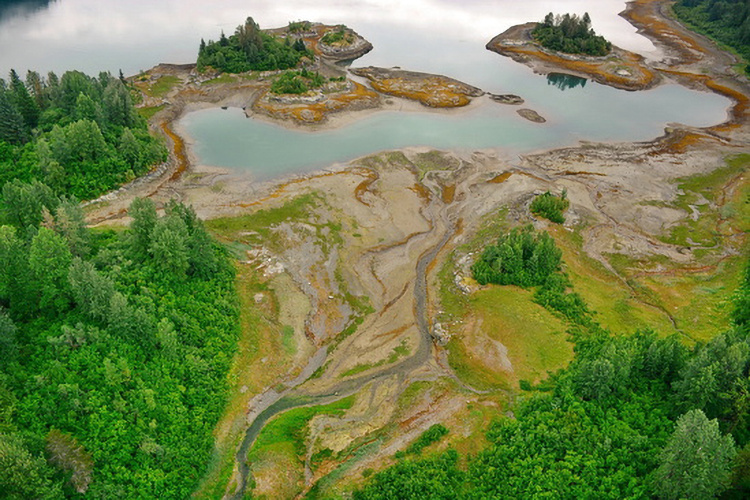