A case study of Alaska pollock born in 2013 provides valuable insight on how diet and habitat influence survival of this commercially valuable fish. 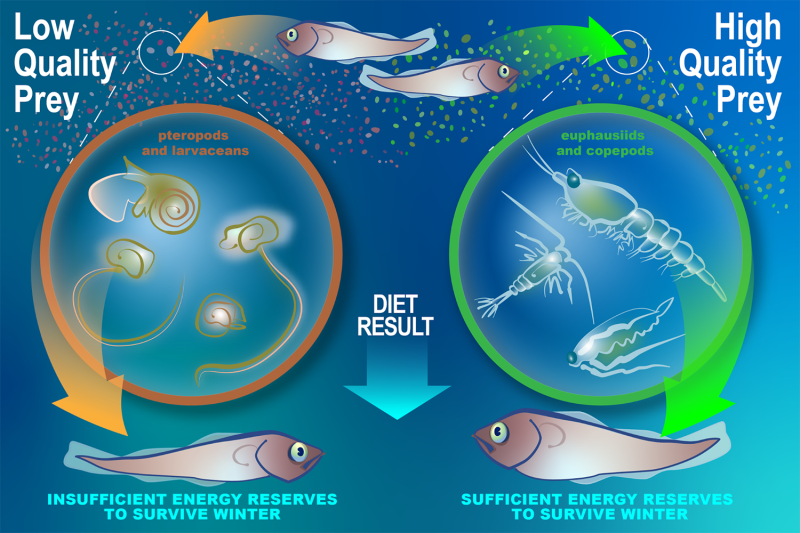 In summer 2013,  the number of juvenile Alaska pollock in the Gulf of Alaska was the largest on record by far. A year later, those fish were mostly gone.

A new NOAA Fisheries study explores what happened to the pollock born in 2013,  focusing on the interaction between juvenile fish and their prey. Results suggest that a diet high in low-fat food may have kept fish from gaining the weight they needed to survive over winter.

“Our results point to poor diet as a contributing factor,” said NOAA Fisheries Alaska Fisheries Science Center biologist Jesse Lamb, who led the study with colleague David Kimmel. “But there is probably not just one answer. Cannibalism and wind-driven transport to inferior habitat likely also played a role. With that combination, the 2013 year class had the deck stacked against them.”

Alaska pollock in the Bering Sea and Gulf of Alaska supports the largest fishery by weight in the United States and second largest in the world. The fishery is recognized worldwide as well-managed and sustainable.

Understanding how many juveniles will become adults available to the commercial fishery—and why—is vital to the sustainable management of pollock.

To build that understanding, NOAA Fisheries Alaska Fisheries Science Center has been studying the early life stages of pollock and other fish in the Gulf of Alaska since 1979. The 2013 Gulf of Alaska survey found an abundance of juvenile pollock (less than 1 year old) about six times higher than any on record since 2000. Surveys in subsequent years showed that very few of these fish survived beyond their first birthday.

Lamb and Kimmel wanted to find out whether diet played a role in this dramatic decline. They compared juvenile pollock abundance, size, condition, and diet composition in relation to available prey across the Gulf of Alaska study area.

Juvenile pollock eat small, drifting animals called zooplankton. Some, like euphausiids (krill)— the preferred prey of juvenile pollock—are relatively large and rich in fat. So are certain copepods. Others like pteropods and larvaceans are small and low in fat.

“Not only are euphausiids and copepods energy-rich, but they pack a lot more nutrition per animal. A fish needs to eat a lot of larvaceans to equal one copepod. This means that they have to spend a lot more energy catching many small prey,” Lamb said.

In 2013, an unusually large proportion of the pollock population was found in the southwest region of the Gulf of Alaska.

“We found that juvenile pollock in the southwest region ate more pteropods and larvaceans. They still ate higher quality foods like euphausiids and copepods, but less of them. We think their relatively poor diet may have prevented them from bulking up enough to survive the winter,” Lamb said.

Lamb suggests that diet was one of a combination of factors that led to the failure  of the 2013 year class. Wind-driven transport, competition, and cannibalism may also have played a role.

A recent NOAA Fisheries study found that wind-driven displacement of juvenile pollock was stronger in 2013 than any other of the six years of the study. Wind-driven currents carried a large proportion of the population from their spawning grounds around Kodiak Island to the southwest area.

“We have observed over the years that the more fish end up in the southwest, the less likely a year class is to be successful,” Lamb said. “Our surveys consistently find smaller pollock in the southwest area. Fish that remain around Kodiak Island seem to be better off.”

Although it could not be tested in this study, Lamb speculates that the large number of juvenile pollock in the southwest may have competed for euphausiid and copepod prey.

Cannibalism by the very large 2012 year class also may have reduced the 2013 year class.

Lamb said the next step will be working with colleagues who look at diets of older fish to see if cannibalism was a contributing factor. The scientists also plan to look at the diets of juveniles in subsequent years in relation to recent climate shifts.

“We have learned that when you observe a high yearly abundance of juvenile pollock, that it will not necessarily indicate  a strong year class. Myriad factors could contribute to diminished recruitment of the year class,” Lamb said. “The better we understand these, the better we can predict changes and manage this valuable fishery.”