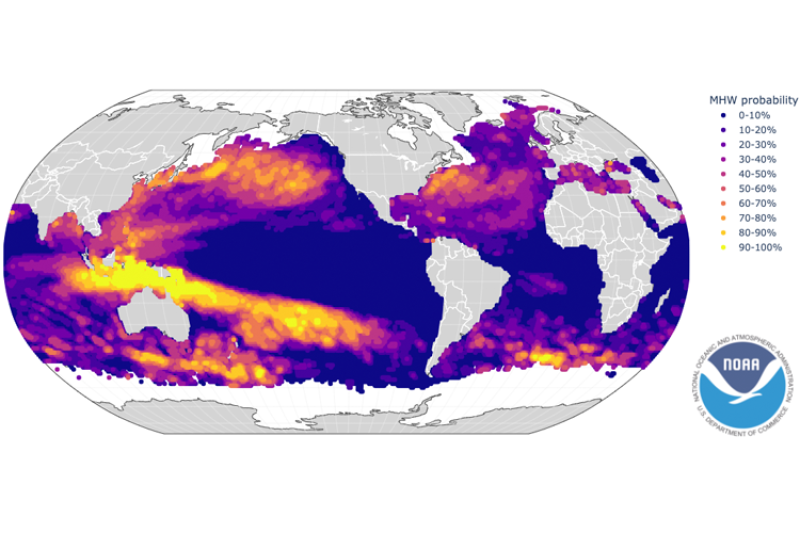 Researchers have developed global forecasts that can provide up to a year's advance notice of marine heatwaves, sudden and pronounced increases in ocean temperatures that can dramatically affect ocean ecosystems.

The forecasts described in the journal Nature could help fishing fleets, ocean managers, and coastal communities anticipate the effects of marine heatwaves. One such heatwave, known as “the Blob,” emerged about 2013 in the northeast Pacific Ocean and persisted through 2016. It led to shifting fish stocks, harmful algal blooms, entanglements of endangered humpback whales, and thousands of starving sea lion pups washing up on beaches.

“We have seen marine heatwaves cause sudden and pronounced changes in ocean ecosystems around the world, and forecasts can help us anticipate what may be coming,” said lead author Michael Jacox, a research scientist at NOAA Fisheries’ Southwest Fisheries Science Center in Monterey, California, and NOAA’s Physical Sciences Laboratory in Boulder, Colorado.

Marine heatwave forecasts will be available online through NOAA’s Physical Sciences Laboratory. The researchers called the forecasts a “key advance toward improved climate adaptation and resilience for marine-dependent communities around the globe.”

The forecasts leverage global climate models to predict the likely emergence of new marine heatwaves. “This is a really exciting way to use existing modeling tools in a much-needed new application,” Jacox said.

Impacts of marine heatwaves have been documented in ecosystems around the world, particularly in the past decade. These include:

On the U.S. West Coast, marine heatwaves gained notoriety following the Blob, which rattled the California Current Ecosystem starting in 2014. That marine heatwave led to an ecological cascade in which whales’ prey was concentrated unusually close to shore, and a severe bloom of toxic algae along the coast delayed opening of the valuable Dungeness crab fishery. Humpback whales moved closer to shore to feed in some of the same waters targeted by the crab fishery. As fishermen tried to make up for lost time after the delay by deploying additional crab traps, whales became entangled in record numbers in the lines attached to crab traps. Recent research has also connected marine heatwaves along the West Coast to a northward shift in California market squid, which have long supported one of California’s largest commercial fisheries.

NOAA Fisheries scientists have since developed a Marine Heatwave Tracker that monitors the North Pacific Ocean for signs of marine heatwaves. The forecasts go a step further to anticipate where marine heatwaves are likely to emerge in coming months, and how long they are expected to persist.

“Extreme events in concert with increasing global temperatures can serve as a catalyst for ecosystem change and reorganization,” said Elliott Hazen, a research ecologist at the Southwest Fisheries Science Center and coauthor of the research. “While marine heatwaves can have some unanticipated effects, knowing what’s coming allows for a more precautionary approach to lessen the impact on both fisheries and protected species. Understanding the ocean is the first step towards forecasting ecological changes and incorporating that foresight into decision-making.”

The forecasts are most accurate during periods influenced by the El Niño-Southern Oscillation, a well-known climate pattern in the Pacific Ocean. In fact, El Niño (the warm phase of the oscillation) could be considered the “world’s most prominent marine heatwave,” Jacox said. It demonstrates that the heatwaves themselves are not new.

The forecasts cannot predict marine heatwaves as far in advance in regions such as the Mediterranean Sea, or off the U.S. East Coast. The atmosphere and ocean fluctuate more rapidly in these areas. The forecasts provide the greatest foresight in areas with known ocean-climate patterns such as the Indo-Pacific region north of Australia, the California Current System, and the northern Brazil Current.

The scientists noted that managers of fisheries and other marine life must weigh their reaction to predicted marine heatwaves based on the potential consequences. For example, they would need to weigh the economic costs of limiting fisheries ahead of a marine heatwave against the risk of inadvertently entangling endangered whales or sea turtles.

“We’re talking about the difference between making informed choices and reacting to changes as they impact ecosystems,” Hazen said. “That is always going to be a balance, but now it is a much more informed one.

The research is a collaboration between scientists at:

The work was supported by funding from the NOAA Climate Program Office’s Modeling, Analysis, Predictions and Projections program and the NOAA Fisheries' Office of Science and Technology. 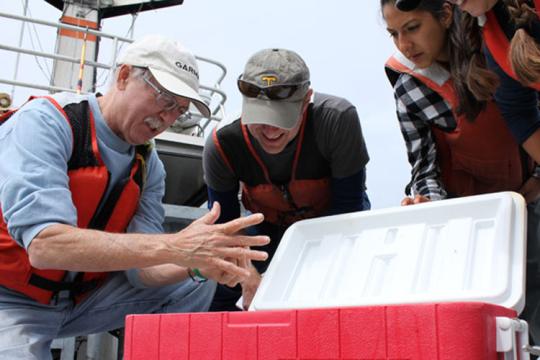