In celebration of our 150th anniversary, we are highlighting people who helped build the foundation of fisheries and marine science. Meet Ravenna Ukeles, a pioneer in algal culture and key figure in devising the “Milford Method.” 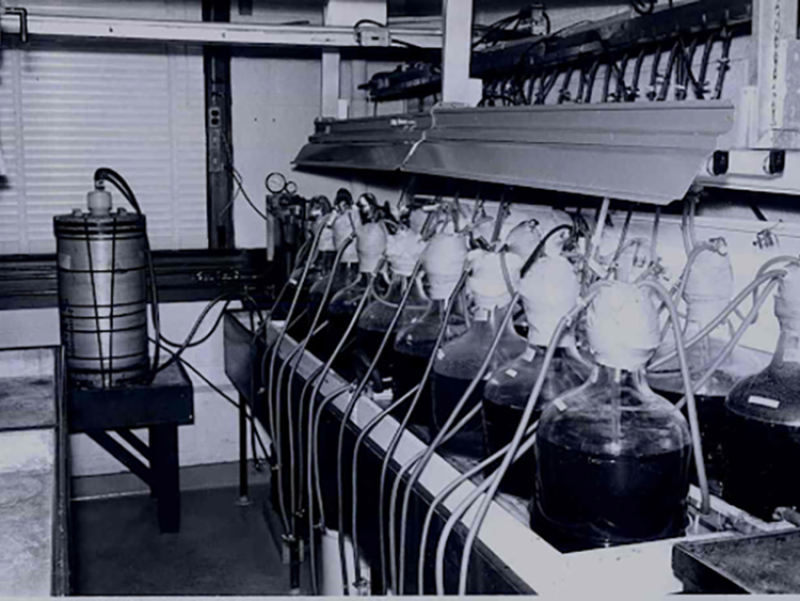 System designed by Ravenna Ukeles for raising sterile algal cultures in large glass containers called “carboys.” The top of each culture container was wrapped and closed to keep the algae sterile, and the attached hoses allowed nutrients to be added or algae to be removed. Credit: NOAA Fisheries/Milford Laboratory Historical Photo Collection

Our Milford Laboratory became a leader in aquaculture research in large part because of the foundational studies on algal production by pioneering scientist Ravenna Ukeles. Her career as an algologist (a person who studies algae) spanned four decades.

While at the NOAA Fisheries Milford Laboratory, she made significant contributions to the development of modern shellfish aquaculture. Her methods for cultivating algae to feed oysters and other shellfish resolved a critical bottleneck in hatchery production. She also expanded the Milford Lab’s Microalgal Culture Collection, a key resource for the shellfish aquaculture industry and the research community.

Ravenna approached her experiments with tenacity and attention to detail. She said of phytoplankton, “The bugs don’t lie, so it’s our job to figure out what they are trying to tell us.”

Born on August 1, 1926 in New York City, Ravenna studied biology at Hunter College and graduated with honors in 1947. She earned a master’s degree from New York University in 1954, where she focused on carbon sources for culturing the protozoan, Chilomonas paramecium. Ravenna completed a doctoral degree at New York University in 1959, working with Dr. Richard P. Hall, one of the top protozoologists at that time. This was a remarkable achievement in the 1950s, when fewer than 10 percent of all doctoral degrees were awarded to women.

Soon after, Ravenna (who asked friends and colleagues to call her “Renee”) was hired by Dr. Victor Loosanoff to serve as algae expert for the Milford Laboratory. Victor and his team were developing protocols for spawning shellfish in the laboratory, but encountered a stumbling block—how to successfully grow algae to feed shellfish larvae. Researchers discovered that oyster larvae could be raised in the lab by feeding them certain kinds of marine phytoplankton. However, there wasn’t a reliable system for growing phytoplankton, especially in the quantities needed by the aquaculture industry.

Solving the algal culture part of the shellfish aquaculture equation was the primary focus of Ravenna’s early career. She built on preliminary algal culture studies conducted by her colleagues. Harry C. Davis was a research biologist at the Milford Lab, and Robert R. Guillard at that time was a biologist at the Woods Hole Oceanographic Institution. After years of rigorous experimentation, Ravenna designed and built a phytoplankton culture system that mass-produced specific marine phytoplankton cultures that were free from bacteria. It was dubbed the “Milford Method.”

This “Milford Method” for growing algae to feed young shellfish is still widely used by the shellfish aquaculture industry around the world.

The Milford Method selects phytoplankton specifically for their nutritional value to shellfish, then cultures them for use as algal feeds. This protocol replaced the existing method (the Wells-Glancy Method) which relied on wild phytoplankton blooms to develop feeds. In comparison, the Milford Method provided superior nutrition for young shellfish.

Once a way to grow algae for superior feeds was developed, the next step was to do so reliably and in large quantities. This consumed the next part of Ravenna’s career. In the late 1960s, she designed a microalgal culture room for the large-scale production of microalgae under controlled, near-clean-room conditions. This state-of-the-art microalgal mass culture room remains a unique and valuable resource for research, dependably producing kilograms of microalgal biomass with consistent biochemical quality.

From the 1960s through the 1980s Ravenna expanded the Milford Lab Algal Culture Collection, originally established by Robert Guillard in the 1950s. It became a repository for pure cultures of more than 100 different algal species. Today, this extensive algal library contains more than 230 algal strains. Scientists and industry professionals from around the world routinely benefit from using starter cultures from the collection.

Her Legacy Lives On

Throughout her 40-year career, Ravenna published dozens of publications on algal and shellfish research. Her legacy continues through the annual Milford Microalgal Culture Workshop, during which Milford Lab staff teach hands-on skills and culture techniques based on the Milford Method. Participants come from commercial, extension, academic, and government organizations.

Ravenna retired from federal service in 1989. She continued to contribute to Milford Laboratory publications and research efforts.

Within the lab community, Ravenna was known for her interest in both the professional and personal lives of colleagues, often offering advice on both. She loved nothing more than to debate the logic of a scientific interpretation, and her imposing stature and penetrating intellect encouraged colleagues to muster their best arguments. Her sense of humor was mischievous, dry, ironic, and often missed by an audience not expecting it. For example, each monthly report to the laboratory director included a line from a nursery rhyme at the conclusion of a sentence describing the result of a real experiment. “I just want to see if anyone is actually reading these,” she said. Apparently she was never questioned about these insertions.

“[Dr. Ravenna Ukeles] leaves us an influential and uniformly excellent body of written work, an appreciation for the truth that underlies life in all its forms, and a sense of curiosity and skepticism that compels us to continue probing living things for the truths they hold.”