U.S. wild-caught Atlantic mackerel is a smart seafood choice because it is sustainably managed and responsibly harvested under U.S. regulations.

Significantly below target population levels. A rebuilding plan is in place. 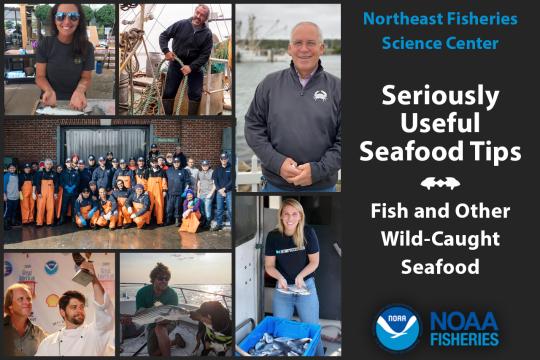 Commercial overage repayment:  If the mackerel ACL is exceeded by the commercial fishery, then the exact amount of the overage will be deducted from the commercial DAH as a single year adjustment between March 31 and May 1 of the following year.

Recreational overage repayment:  If the recreational fishery landings are responsible for the overage, then landings in overage the RHL will be deducted from the RHL in the following year.

Non-landings overage repayment:  If the mackerel ACL is exceeded, and the overage has not been accommodated through other landing-based accountability measures, but is attributable to either the commercial or recreational sector (such as research quota overages, dead discards in excess of those otherwise accounted for in management uncertainty, or other non-landing overages), then the exact amount, in pounds, by which the sector ACT was exceeded will be deducted from the following year.

Northeast multispecies regulations include four regulated mesh areas (RMAs) that regulate which gear can be used in each of the following areas:  Gulf of Maine (GOM), Georges Bank (GB), Southern New England (SNE), and Mid-Atlantic (MA).

In these areas and fisheries Atlantic mackerel, squid, and butterfish can be retained.

More information regarding multispecies regulations is available on the Northeast Multispecies page. 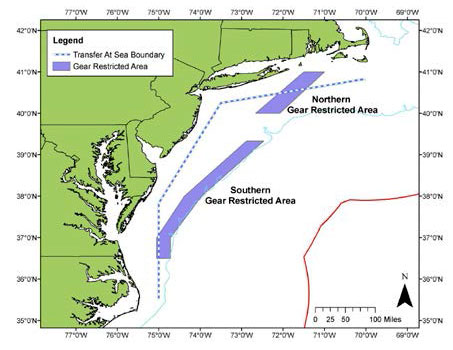 See the maps and coordinates.

What are the requirements for slipped catch?

If the catch was slipped for any other reason, the vessel operator must immediately terminate the fishing trip and return to port. A slippage event can include the release of fish from a codend or seine prior to completion of pumping or the release of an entire catch or bag while the catch is still in the water. Vessels with a limited access Atlantic mackerel and/or a longfin squid limited access permit must complete, sign, and submit a Released Catch Affidavit following any slippage event.

Owner/operators participating in the Atlantic mackerel, Illex squid, and Longfin squid/butterfish must submit trip reports weekly. Reports must be postmarked or received by midnight of the Tuesday following the reporting week (Sunday through Saturday). If a trip starts in one week, and offloads in the next, it should be reported in the week the catch was offloaded. Copies of fishing log reports must be kept on board the vessel and available for review for at least 1 year, and must be retained for a total of 3 years after the date the fish were last possessed, landed, and sold.

The Atlantic mackerel, squid, and butterfish fisheries do not have any IVR requirements. However, if you are participating in a research program such as research set-aside (RSA) or fishing with an exempted fishing permit (EFP), there are IVR requirements. Please refer to your RSA or EFP paperwork for instruction on using IVR.

The owner or operator of a vessel issued a limited access mackerel permit must report catch (retained and discarded) of mackerel daily via VMS. Daily mackerel VMS catch reports must be submitted in 24-hr intervals for each day and must be submitted by 0900 hr on the following day. Reports are required even if mackerel caught that day have not yet been landed.

Atlantic herring and Atlantic mackerel may be retained by vessels fishing with small-mesh bottom trawl gear in the exemption areas, provided vessels comply with all season, area, and gear requirements, possession limits, and are issued a whiting (Category K Open Access Northeast Multispecies)  permit or a limited access Northeast multispecies permit. Specific requirements for each area can be found on the linked webpages within the table below. River herring and shad may not be retained when fishing with small-mesh bottom trawl gear in these exemption areas, with the exception that alewife may be retained in the Gulf of Maine Grate Raised Footrope Trawl Exemption Area.

A Letter of Authorization (LOA) is required to participate in some of these exemption areas. Permits and LOAs can be obtained from our Permits Office at (978) 282-8438, or online by visiting our Forms and Applications webpage. If you have questions about these exemption areas, please call the Sustainable Fisheries Division at (978) 281-9315. 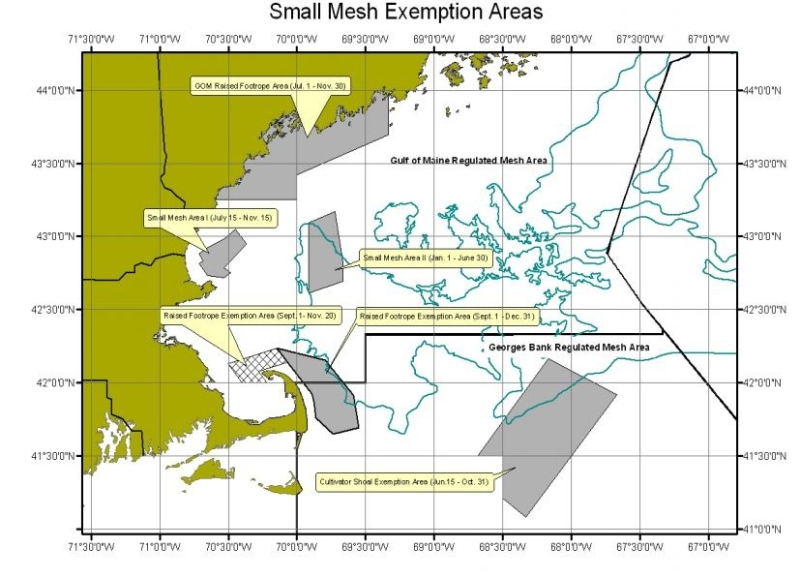 The Atlantic mackerel, squid, and butterfish fisheries in the Greater Atlantic Region operate primarily in the Mid-Atlantic region of the eastern coast of the U.S, from Massachusetts to North Carolina. These fisheries primarily use single and paired mid-water trawl, bottom trawl, and purse seine throughout the entire range. Atlantic mackerel, squid, and butterfish are jointly managed in federal waters by NOAA Fisheries in conjunction with the Mid-Atlantic Fishery Management Council.

1991: Amendment 4 limited the activity of directed foreign fishing and joint venture transfers to foreign vessels and allowed for specification of OY for Atlantic mackerel for up to three years.

1997: Amendment 7 established consistency among FMPs in the NE region of the U.S. relative to vessel permitting, replacement and upgrade criteria.

1998: Amendment 8 brought the FMP into compliance with new and revised National Standards and other required provisions of the Sustainable Fisheries Act. This action also added a framework adjustment procedure.

2001: Framework 1 created a quota set-aside for the purpose of conducting scientific research

2002: Framework 2 extended the moratorium on entry to the Illex fishery for an additional year; established that previous year specifications apply when specifications for the management unit are not published prior to the start of the fishing year (excluding TALFF specifications); and allowed for the specification of management measures for Loligo for a period of up to three years.

2003: Framework 3 extended the moratorium on entry to the Illex fishery for an additional year.

2004: Framework 4 extended the moratorium on entry to the Illex fishery for an additional five years

2008: Amendment 9 allowed for multi-year specifications for all four managed species (mackerel, butterfish, Illex, and Loligo) for up to 3 years; extended the moratorium on entry into the Illex fishery, without a sunset provision; adopted biological reference points for Loligo recommended by the stock assessment review committee (SARC); designated EFH for Loligo eggs based on available information; and prohibited bottom trawling by MSB-permitted vessels in Lydonia and Oceanographer Canyons.

2010: Amendment 10 implemented a butterfish rebuilding program, increased the Loligo minimum mesh in Trimesters 1 and 3, and implemented a 72-hour trip notification requirement for the Loligo fishery.

2012: Framework 5 broadened the scope of individuals who can perform hold measurements for limited access mackerel vessels

2012: Framework 6 clarified the Council's risk policy and describes the limited circumstances under which acceptable biological catch (ABC) can be increased for stocks without status determination criteria on overfishing.

2013: Framework 7 converted the butterfish mortality cap from a catch cap to a discard cap

2014: Framework 8 implemented changes to improve operation of the butterfish discard cap in the longfin squid fishery and the directed butterfish fishery. Final Rule.

2015: Amendment 19 eliminated the requirement for vessel owners to submit "did not fish" reports for the months or weeks when their vessel was not fishing. This action also removed some of the restrictions for upgrading vessels listed on federal fishing permits.

2015: Framework 9 established measures to enhance catch monitoring and address slippage (catch that is discarded before it has been sampled by observers) in the Atlantic mackerel fishery.

2017: Amendment 18 - Unmanaged Forage Omnibus Amendment implemented management measures to prevent the development of new, and the expansion of existing, commercial fisheries on certain forage species in the Mid-Atlantic. Final Rule.

2018: Framework 11 - Omnibus Acceptable Biological Catch Framework established a process for setting constant multi-year Acceptable Biological Catch (ABCs) limits for Council-managed fisheries; clarified that the Atlantic Bluefish, Tilefish, and Atlantic Mackerel, Squid, and Butterfish FMPs will now automatically incorporate the best available scientific information in calculating ABCs (as all other Mid-Atlantic management plans do) rather than requiring a separate management action to adopt them; clarified the process for setting ABCs for each of the four types of ABC control rules. Final Rule. 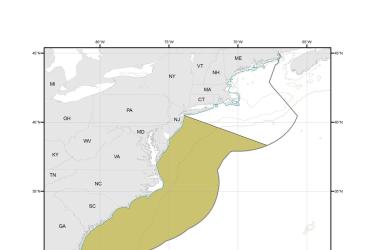