We conduct a variety of genetic research on Pacific salmon, groundfish, and forage fish species to comply with regional, national, and international agreements and treaties for managing marine resources.

Legislation mandating research includes the Pacific Salmon Treaty, the North Pacific Anadromous Stocks Act, and the Magnuson-Stevens Fishery Conservation and Management Act. Our research helps improve understanding of ocean ecology by supporting fish stock assessments, identifying where fish come from (i.e., specific regions or countries of origin), whether fish from different populations mix in different spawning, nursery and feeding areas and whether they are being caught in commercial fisheries.

NOAA fishery observers collect genetic samples and ship them to our Auke Bay Laboratories for analysis. We extract DNA from the fish using special equipment (i.e.,using silica-based column technology). We then look for genetic markers to help us identify different features in the DNA sequence that can be used to differentiate between individuals in a population. To do this, we use processes such as single nucleotide polymorphism (SNPs) and microsatellite repeats. We then perform genetic mixed-stock analysis using Bayes software developed at the Auke Bay Laboratories (Pella and Masuda, 2001). We share our results with resource managers at the North Pacific Fishery Management Council to help make management decisions.

We are trying to establish a genetic baseline for Alaska chum salmon so we can determine the stock composition of western Alaska chum salmon caught as bycatch in the pollock fishery. We are also identifying new genetic markers to identify different features in the DNA sequence to help us differentiate between individuals in a population. We are collaborating with Alaska Department of Fish and Game and University of Alaska Fairbanks on this effort.

In collaboration with Alaska Department of Fish and Game, we have grouped genetic samples from 84 baseline stocks into 13 regions in response to manager needs. Port samples collect matched genetic and scale samples each year. SNP genotyping is performed using TaqMan chemistries for 45 SNP probes. We then use other analytical methods to determine stock composition estimates for all 13 regions (including Nass and Skeena). By comparing genetic information across time and area, we are able to detect trends and identify the number of treaty delimited fish caught in the fishery. Results are communicated back to the Pacific Salmon Commission for treaty evaluation. This project is funded by the PSC Northern Boundary Fund. 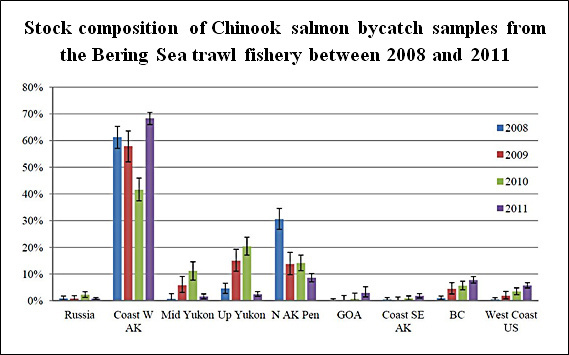 We are completing herring stock composition analysis in Prince William Sound to help determine the number of populations in the area. The work is funded through the Exxon Valdez Oil Spill Trustee Fund. Capelin and arctic cod are being collected as part of Arctic surveys and their stock structure will be used as a baseline in the Chukchi Sea. We are also involved in collaborations to identify new forage fish species using DNA sequence analysis and meristics. Meristics involves counting quantitative features of fish, such as the number of fins or scales to help identify the species the fish belongs to.