Key Southern California Rockfish Species Survive Capture Over the Longer-term Following Release
October 26, 2021
Deep-water rockfish reeled quickly to the surface often emerge from the water with eyes and organs bulging like alien beings—due to the sudden change in pressure—a condition known as barotrauma. New research shows that if fishermen return fish to their natural depths quickly, their bodies return to normal and they can survive any ill effects.

Mako Shark Tracking off West Coast Reveals “Impressive” Memory and Navigation
August 28, 2019
The largest effort ever to tag and track shortfin mako sharks off the West Coast has found that they can travel nearly 12,000 miles in a year. The sharks range far offshore, but regularly return to productive waters off Southern California, an important feeding and nursery area for the species.

White Abalone Spawning Produces 25 Million Eggs for Captive Breeding Program
May 16, 2019
Ten adult white abalone produced and fertilized 25 million eggs, well over previous production, which quickly overran UC Davis’s Bodega Marine Laboratory. The spawn was so successful that when the eggs hatched two days later, the team shipped millions of tiny larvae to partner institutions throughout Southern California. Among these shipments, the research aquarium at the Southwest Fisheries Science Center in La Jolla, CA, received 4.8 million larvae over the course of two deliveries. The staff spent the following week conditioning these newly hatched larvae for settlement to the bottom of tanks that will be their home for the next one to two years.

Tagging Reveals Secrets of Southern California’s Largest Sharks
May 09, 2019
The basking shark, the largest shark in the waters off Southern California, is also the most elusive. NOAA Fisheries researchers are now seeking to unravel the mysteries of basking sharks by tagging them with satellite transmitters that will reveal their movements and behavior as they roam the waters around Channel Islands National Marine Sanctuary and beyond.

Advances in Captive Breeding of Black Abalone
March 28, 2019
For the first time at the Southwest Fisheries Science Center, scientists induced spawning by employing two synthetic mollusk hormones to trigger the female abalone to release their eggs. Three of the abalone given the hormones released eggs, demonstrating that scientists can prompt the shellfish to reproduce in captivity.

Clues At Fish Auction Reveal Several New Species Of Opah
June 07, 2018
As commercial fishermen sold their catch at the busy United Fishing Agency (UFA) auction house in Honolulu, Hawaii, fish buyer Garrett Kitazaki noticed something curious about the opah changing hands: some had much bigger eyes, and their spots and color looked different. 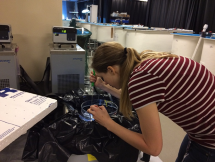 NOAA Fisheries Scientists Spawn Pacific Sardines For The First Time In Captivity
April 17, 2017
Like many species, sardines require just the right conditions to reproduce. Researchers working with sardines in the Southwest Fisheries Science Center’s Experimental Aquarium had tried for decades to identify those conditions. Then in early March, they hit upon the right combination of conditions and documented sardine spawning for the first time in captivity.

NOAA Scientists Search for Endangered White Abalone
August 01, 2016
Fisheries biologist Kevin Stierhoff and his colleagues are tracking populations of one of the most endangered invertebrates in the sea, a relative of snails and slugs that lives at depths as great as 60 meters (ca. 200 feet) off Southern California and Mexico. The enigmatic animals are well camouflaged; their shells are brownish and covered in algae like the rocks upon which they live, making them quite difficult to spot.

A Mako's Last Meal Part II: The Shark Bite Effect
June 27, 2016
In 2013, the world record mako shark was caught off the coast of California. NOAA Fisheries researcher, Antonella Preti, discovered an adult sea lion in its stomach, which you can experience in A Mako Shark's Last Meal: Part 1. In our new video, you’ll see that this sea lion is one of many that have been attacked by sharks. Some have survived such encounters, and their wounds provide important insight on the state of sharks in southern California. See how scientists are studying the shark bite effect.

Tagged Hammerhead Shark Travels Widely In Warm Pacific Waters
September 04, 2015
The first hammerhead shark fitted with a satellite tracking tag off Southern California has traveled more than 1,000 miles to Mexico and back again since NOAA Fisheries researchers tagged it near San Clemente Island about two months ago.

Warm Blood Makes Opah an Agile Predator
May 12, 2015
New research by NOAA Fisheries has revealed the opah, or moonfish, as the first fully warm-blooded fish that circulates heated blood throughout its body much like mammals and birds, giving it a competitive advantage in the cold ocean depths.